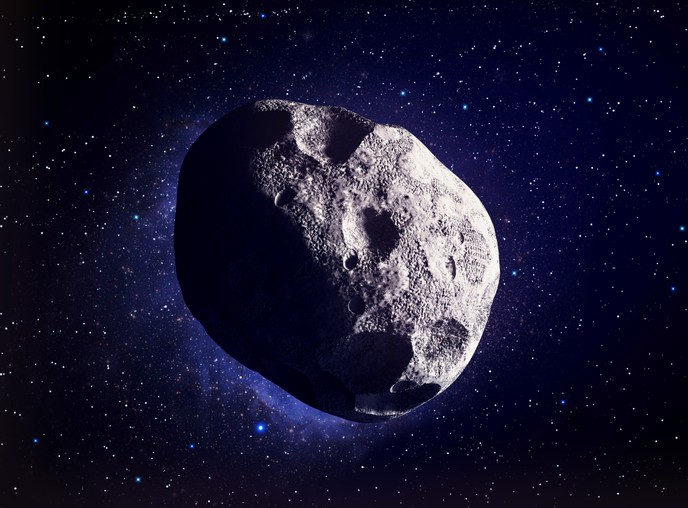 Free us from ignorance, ancient asteroid. ANDRZEJ WOJCICKI/Getty Images
Delay costs for the Tokyo Olympics could reach $2.8 billion: The figures are in line with Japan's estimates since the country decided to delay the international games eight months ago. The Tokyo Olympics are now scheduled to open on July 23, 2021—fingers crossed. We think it'll happen.

Biden urges Congress and Trump to cut the shit and pass a goddamn relief bill: The President-elect thanked the bipartisan group of senators "for attempting to negotiate a $908 billion compromise [relief] package," writes the New York Times. Biden stressed that "this situation is urgent," and he said, "if we don’t act now, the future will be very bleak.” Biden wants a relief bill passed now and lawmakers to come back post-inauguration to fund more relief in the lead-up to the vaccine roll-out.

Washington's Department of Health reports 1,853 new COVID-19 cases, 25 new death this afternoon: For everyone keeping track, that new report brings the state's totals to 174,290 cases and 2,925 deaths. That figures to 1.7% of people diagnosed with coronavirus in the state have died from it.

Our state's COVID hospital admissions are at their highest level since this whole mess started: The hospitalization numbers doubled statewide last month. As of Wednesday, almost 23% of Washington's staffed ICU beds were filled by coronavirus patients. "We’ve doubled the number of patients in about three weeks. If that keeps happening, there’s not double the same ICU staff available,” said Cassie Sauer, president of the Washington State Hospital Association. “There’s no way you can double the number of staff.”

Washingtonians want to be COVID-19 tracked: According to a Washington State Department of Health press release, over one million Washingtonians enabled the WA Notify COVID-19 exposure tech on their phones, making it easier to alert people about infections and track outbreaks.

For all the visual learners out there: Here's how COVID-19 has spread across the country since October. Fucking grim.

We haven’t even seen the worst yet. We are so damn screwed. #COVID19 pic.twitter.com/98j7UETOMU
— Eric Feigl-Ding (@DrEricDing) December 4, 2020

OK, what's the catch: Amazon donated $270,000 to Ballard P-Patch to cover the remaining fundraising gap to help save the community garden. The P-Patch was at risk of losing their plot when Our Redeemers announced plans to sell the bit of land last year, reports MyBallard. Maybe Bezos loves gardening?

Randy Engstrom steps down as director of Seattle's Office of Arts and Culture: Mayor Durkan announced today. "I am humbled and hopeful that the city may co-create a more equitable, creative and sustainable city for future generations," said Engstrom in a press statement. He had served as director for eight years and will now turn his focus to teaching, "advocating for national cultural policies," and spending time with his family.

More shake-ups at Seattle's Human Services Department: As part of a series of department leadership reshuffling, Mayor Jenny Durkan announced today that Helen Howell, formerly the senior director of policy, research, and social impact initiatives at the King County Housing Authority, will temporarily lead HSD, taking over for Jason Johnson, who stepped down in February. Johnson was the interim director of HSD for two years. Durkan tried to make the position permanent, but she withdrew the nomination when the city council protested the decision last year.

Bar and restaurant owners are making like bears and hibernating for the winter: The Derschang Group and John Richards recently announced that their respective establishments—Oddfellows Cafe and Life on Mars—will go on hiatus for a little while starting on Dec. 6. CHS Blog noted that 12th Avenue cocktail bar Canon also announced a temporary shutdown late last month to curb the pandemic's losses. Hopefully, when they wake, things will look a little better and they can keep their employees safer.

Federal judge restores Deferred Action for Childhood Arrivals (DACA) program ended by the Trump administration: U.S. District Judge Nicholas G. Garaufis in Brooklyn ordered the Department of Homeland Security to post a public notice by Monday to accept first-time applications, reports WaPo. This will make thousands of undocumented immigrants brought to the U.S. as kids immediately eligible for work permits. The ruling is a victory for immigrants and advocates across the country who expected the Biden administration to restore the DACA program in January.

Sound Transit slow downs: Sigh. There goes the transit service. Sound Transit is feeling the brunt of some new staffing cuts and will be slowing down some of its frequent light rail service. Starting on Monday, the train will only run every 12 minutes during peak times. Currently, trains run every eight minutes.

INBOX: Sound Transit will be temporarily reducing light rail service next week because of staffing shortages due in part to #COVID19. pic.twitter.com/X6S1CsHkU2
— The Urbanist (@UrbanistOrg) December 4, 2020


CityLab warns transit could start seeing cuts nationwide: Without any more federal cash. And these are big cuts. D.C. said it might shut down all of its weekend rail service to close budget cuts. That sort of thing. Even if Congress passes the current relief bill on the table, transit agencies would only receive $15 billion, and they say that's only half of what they need.

The members of the House of Representatives are potheads: OK—not really, but they did pass a measure decriminalizing weeeeeeed at the federal level, the first time Congress has ever acted on the issue. Does it have a chance in the Senate? Hell no.

God, this looks too familiar: California is on fire again. The Bond Fire—which started just after 10 pm on Wednesday in Silverado Canyon—has consumed more than 7,200 acres with "absolutely no containment." Fire officials say there's no doubt that the blaze will continue to burn through the weekend. Winds between 55 to 80 mph have helped pushed flame and smoke throughout southern California as an estimated 25,000 residents were evacuated from the area yesterday. From yesterday:

Let the kids wrestle: Says the Ohio High School Athletic Association, which just released some new COVID-19 guidelines for winter sports. For wrestling, a high contact, greasy, teen-on-teen sport, players cannot shake hands before or after the match, and they have to wear a mask any time they're off the mat, OHSAA says. Nothing is changing about the wrestling part, though, when wrestlers can pin each other down in all kinds of nelsons and whisper sweet nothings in each others' ears. I know nothing about wrestling.

Japanese space probe will deliver a load of prehistoric asteroid rock this weekend: The Hayabusa-2 probe left for a mission in the asteroid belt in 2014 and arrived at its destination, the prehistoric asteroid Ryugu, in 2018. Hayabusa-2 collected a cache full of old ass asteroid rock and soil, stuff scientists say could hold the secrets to the universe since the materials predate Earth. The probe will drop its load down somewhere in Australia on Saturday.

Hold up, we're getting paged by Rich Smith out in the field. He's watching failed-gubernatorial candidate Loren Culp's Facebook Live "announcement" from today. Take it away, Rich:

Loren Culp’s grift keeps getting griftier: Though Culp lost his race against Jay Inslee by well over half a million votes, the campaign for the former small-town cop has apparently hired Tim Eyman’s lawyer, Steven Pidgeon, to maintain the fiction that Culp may have actually won the contest. During a rambling 12-minute announcement, which has so far garnered 14K views and over 1.5K comments on Facebook, Pidgeon claimed without evidence that “886,161 votes that don’t appear to be registered voters in the state of Washington... nonetheless voted in the state of Washington.”

Culp contributed to the event by staring into the camera like a baby drawn to the brilliance of a set of shiny keys and saying, “And that, ladies and gentleman, is the facts we’ve uncovered, so far, not all of them... Don’t forget warrior mentality. Never give up, never give in. Let’s do what we do.”

The Republican Secretary of State, Kim Wyman, has repeatedly said she’s found no evidence of such widespread voter fraud: And she has called for the Culp campaign to give her any evidence whatsoever to support their claims. So far they have delivered none. In a statement today, she added: "As a member of law enforcement who purports to have evidence of felonies, Mr. Culp should be duty-bound to provide that evidence to the appropriate authorities so these cases can be investigated by county sheriffs and prosecutors, and possibly the FBI."

Every day the Washington State Republican Party doesn’t condemn this sad behavior is a day they reveal their complicity with this toxic nonsense and also their powerlessness to stop a monster they created in the first place. They’re trying to ignore him until he runs out of money and starts a podcast or whatever, but I bet he sticks around a little longer than they’d like. R.S.

Italy bans Christmas travel: From Dec. 21 to Jan. 6, Italians can't go anywhere outside of their home regions except for work, medical reasons, or emergencies to clamp down on the COVID-19 outbreak. But, like, exempting work travel? C'monnnnn. Shit is bad out there. Since the start of the outbreak, 58,000 Italians have died. On Thursday alone, 1,000 people died.

Alleged Nebraska drug kingpin arrested after caught using a fake identity: This 72-year-old man has eluded police for 35 years after he was accused of running a drug operation on the Southern Line railroad system. Police recently caught him after he applied for a passport using the identity of a dead infant.

Lol this guy robbed a bank but pulled off his face mask to talk:

China's developing artificial rainfall that will cover an area the size of India: Chinese scientists are working on an experimental weather modification system that will use satellites and rockets to divert and control artificial rainfall. I'm confused, too. The point is to mitigate drought, fire, hail, and high temps with the fake rain. The China State Council thinks that will be operational by 2025. By that time, New Zealand is planning to be completely carbon-neutral.

Nathalie Graham reported on city hall for The Stranger, and managed to somehow continue to do that during the COVID-19 pandemic.