We’ve heard from everyone in the city about the troubled intersection – except for the people who make a living there.

It would not be the Seattle process if we did not meet with all stakeholders. HK

“Do you work for the cops?” a man asked, shaking a half-full pack of Marlboros at me.

“No,” I said, helping myself to a cigarette. “I’m a reporter. I’m trying to figure out what’s going on over there.”

I pointed kitty-corner across 3rd Ave, just a block away, to a red McDonald’s sign that marked the small stretch of sidewalk that has left half of Seattle too scared to come downtown. Over the past few weeks, all eyes have been on the corner of 3rd and Pine, mostly through KOMO’s camera lens as reporter Jonathan Choe covers what he called on Twitter “a full blown takeover in a great American city.”

The man pushed himself off the wall he was leaning against. He looked over his shoulder at 3rd and Pine, crinkled up his nose, and shrugged.

“Eh,” he said, as though he had no idea that “a full blown takeover” was allegedly in the works down the block.

The corner of 3rd and Pine has long been a hub for flipping lifted merchandise and selling drugs. Recently, the area caught public interest as more people flooded to the spot after cops cleared a bus stop on 12th and Jackson in Little Saigon. The influx prompted a bakery to close up its shop on the block, and gun violence claimed two lives on the avenue in the same week. In response, Mayor Bruce Harrell directed the Seattle Police Department to increase its presence in the area. The department even established a mobile precinct.

Through all of this, broadcast journalists and the paper of record have amplified the voices of police, business owners, and local officials. But it would not be the Seattle process if we did not meet with all stakeholders. It’s time we hear from the people of 3rd and Pine. 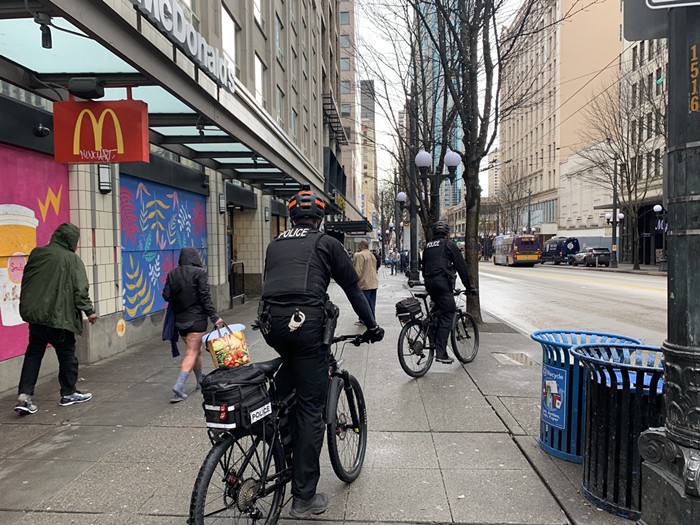 On the hunt for toilet paper and beer. HK

Andre sat on a metal post, wrapped up in a coat that was way too big for him. A scrape on his forehead looked pretty bad, but it didn’t seem to bother him; his brown eyes were fixed on a small butane torch lighter he was fiddling with. He said I could have it for a couple bucks. I said, “No, thank you.” With the heavy police presence nearby, holding any item at all was suspect. Before declining the lighter, I'd seen a bike cop follow a man carrying a six-pack of beer and some toilet paper. “That’s an awful lot of beer and toilet paper,” the cop said of the very normal amount of beer and toilet paper. “You wouldn’t be trying to sell it?”

Andre said he has struggled with homelessness on and off since he was 14. That’s when he started selling at 3rd and Pine. He’s been there almost everyday since. He’s 30 now.

“You get caught up,” Andre said when I asked him why he’s spent half his life on this corner. “You make your first sale, you get a little money. Then you’re 30 and you’re still at 3rd and Pine.”

Andre said little has changed about the area in fifteen years – some of the same people are still selling. One thing that has changed, he said, is that he doesn’t sell drugs anymore. He laughed and said he’d rather do them.

Andre lives in an apartment thanks to a city-run housing program, but he doesn’t have a job other than selling flipped merchandise. Over the last two years, the government has forked over financial relief to taxpayers with formal jobs, but people like Andre, who work informal jobs, have not seen such benefits.

“Large numbers of people are now stranded in the illicit economy… and there’s not an obvious way for them to cross over to a lawful income source,” said Lisa Daugaard, the executive director at the Public Defenders Association.

Daugaard suggested either a guaranteed basic income or a WPA-style jobs program to give sellers like Andre an alternative.

I asked Andre what the city could do to get people to stop selling at 3rd and Pine. He said the city could give them something else to do: “Maybe build a basketball court? Somewhere to shoot hoops?” 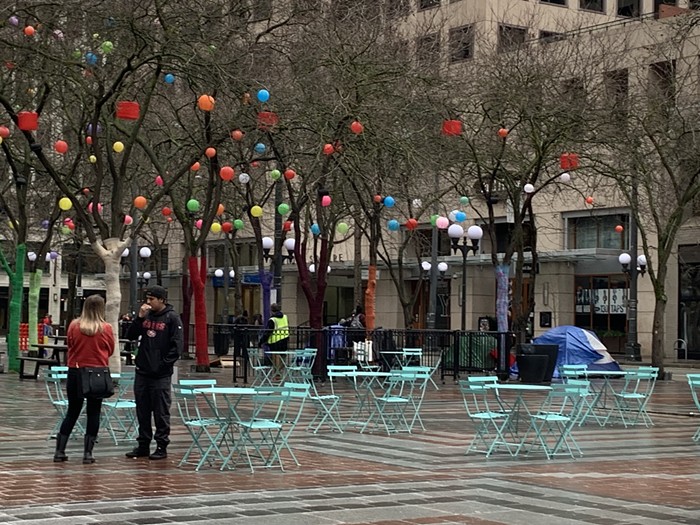 An attempt to "activate the space." HK

A woman with blue lip gloss approached Andre and bought the lighter off of him. Her name was Nicole, and she stopped by 3rd and Pine on her way to check on her EBT benefits.

Nicole grew up in Seattle. She said she’s been homeless on and off since she was 17, and her struggles with psychosis keep her from holding down a job. She’s a mother, a survivor of domestic violence, and sometimes she likes to get a good deal at the corner of 3rd and Pine.

Nicole used to have an apartment through a city-run housing voucher program, but she got evicted last month. She said she didn't know why – “I didn’t give them any reason to kick me out. There wasn’t even a stain on my carpet.”

I asked her what the city could do to clean up crime on the corner of 3rd and Pine.

She laughed, “It’s every corner.”

Nicole added that the crime will move somewhere else when the police swarm. Some call this the “toothpaste effect," and it is often used as an argument against emphasis policing.

Early in his term, the Mayor announced that the city would once again try to crack down on crime by focusing police personnel on specific high-crime areas in the city. The first target was 12th and Jackson in the Chinatown International District, which was experiencing some of the same issues seen on 3rd and Pine.

The Mayor claimed victory over crime in that spot at the end of last month. A spokesperson from the Mayor’s office said the city was now looking to replicate the “promising early results” from Little Saigon in the downtown area. But Tanya Woo, a leader at the CID nightwatch, said it was too soon to tell whether or not those emphasis patrols will lead to lasting change.

Quynh Pham, the executive director for The Friends of Little Saigon, said sales seem to have spread to other places in the neighborhood, to Pioneer Square, and even to 3rd and Pine.

“It sucks that we’re moving the issue around instead of solving it,” Pham said in a phone interview. “Maybe they’ll just get tired of being chased.”

Daugaard agreed that emphasis policing was not a permanent solution, but she said visible police presence was the “least harmful method to quickly interrupt the dynamic,” so long as the policing did not result in mass arrests.

Nicole did not imagine people would just give up what for many was their livelihood. She said the solution was “immediate housing and immediate jobs.” She added that people return to this spot because they can make money, and because they don’t have anywhere else to go.

King County Public Defense Director Anita Khandelwal was on the same page as Nicole when Harrell initially announced the emphasis patrol strategy. She said, "The amount of money we will spend on hiring more officers to patrol 'hot spots,' on prosecutors to file those cases, on public defenders to defend them, on judges to hear them would be so much better spent on housing people and meeting their needs." 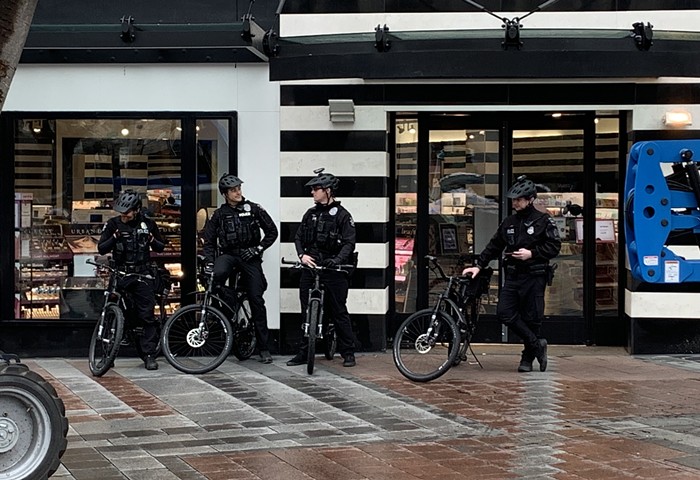 Frank wore dark sunglasses and a fitted denim jacket. He told me he sells everything but “blues,” which is code for fentanyl pills. When I said I don’t do drugs, he said he’d give me a deal on tequila. I did not take him up on that offer. But Frank really did not need my business – in the span of 20 minutes, he had four buyers.

“Everyone buys drugs,” he said, when I asked about his typical customer. “Black, white, man, woman, homeless, not homeless.”

Frank is in his 50s. He moved from the Congo to the United States to get rich. He said so far it has not been working out so well. He doesn’t have citizenship or a work visa, so he gets paid “a little more than nothing” under the table for part-time security work at a business just up the street from his day job, selling on 3rd and Pine.

Since he was a security guard, I asked him about the recent violence in the area. He shook his head. Frank did not know either of the shooters, but he assumed the cause was “what it always is”: an argument about drugs, money, or girls.

“You could stand here for 100 years and never get hurt,” Frank said, with emphasis on “you.” He said the victims of the violence are the people of 3rd and Pine. The general public has little to worry about, according to Frank.

The latest victim of violence in the area was a boy believed to be 15 years old. He was shot in the stomach, and he died from his injuries at Harborview Medical Center on Wednesday. In a statement, the Mayor called these continued acts of violence “unacceptable” and “beyond tragic.” While Harrell vowed to crack down on gun violence, gun safety advocates say that gun violence is not the problem, it’s the symptom.

“When our city is having a challenging time finding places for people to live, or supporting people who are in the midst of a mental health crisis, it creates a crisis on multiple levels,” said Sean Goode, executive director at Choose180. “We need to address the material conditions that our residents are living in that lead to the increase in violence that we've all been experiencing.”

I spent a few hours hanging out with the people of 3rd and Pine. I gave Andre my email, I walked Nicole to the Department of Community and Human Service on 5th, and on my way out, I let a man with a freshly sown pinkie use the end of my cigarette to light his own.

I told him to have a good day. He said, “I’ll try. Being homeless sucks.”