Slog PM: Link's New Stations Are Working Again, the GOP Pulls Out of Presidential Debates, and Stop Talking to Strangers in Bars for Now 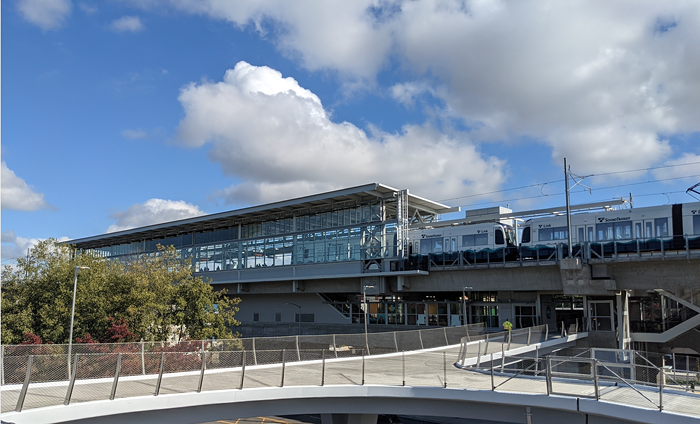 Will Link's new stations become the new escalators? Charles Mudede
What's to blame for the sharp rise in car thefts? New laws that prevent the police from engaging in very dangerous, high-speed car chases. KOMO reports that thieves now know they can get away with a stolen car because the police's arms are tied by those wrongheaded liberal lawmakers. The executive director of the Washington Association of Sheriffs and Police Chiefs, Steve Strachan, told the outlet: “I think it’s the best evidence we’ve seen that the change in the law has created an environment I’ve been pulled in criminals,” whatever that means. Of course, the protection of property is more important than the protection of life. We get that's how the right sees the world. But we live in a very hi-tech age. You feeling me? Right now, I can walk into a grocery store that's fully automated. Right now, banks can move billions by pressing one button on a keyboard. Right now, a satellite knows the exact location of my cell phone. But when it comes to reclaiming a stolen car (a very massive object), there is no other option than a good old-fashioned car chase. This is curious, no?

So, the pandemic is still not a thing of the past. And its reach into the future is growing every day. Philadelphia finally gave up the whole sad game of believing COVID is nowhere else but behind us and, according to the Seattle Times, announced a return to "indoor mask mandates," a policy that actually worked. So far, Gov. Jay Inslee wants to hear nothing about masks and vaccine mandates. This is an election year.

This needs to be said. There is a class of bar types (particularly men bar types), who think it's A-OK to talk with total strangers. They want to yammer in your face because that's the American way. But the pandemic hasn't stopped sickening and killing people. It sent nearly 1,000 Americans to meet their maker only yesterday. And you want to yammer without a mask? Yammer like it's 2019? You are a fucking stranger. There is no need for you to talk to me. It's not at all worth the risk. Shut your trap, and drink your drink.

A word from Rich Smith, a lover of Glo's:

Glo's, Capitol Hill's beloved, very tiny brunch spot, is only $64,000 away from meeting its fundraising goals. Tomorrow marks the campaign's last day, and they've got $20,000 in matching funds still available, so now's the time to pony up some cash to get them over the finish line. As I mentioned last month, owner Julie Reisman says she needs the money to make up for a pandemic-related spike in construction costs at their new location farther up the Hill. The architects working on the new spot sent in some renderings of the new layout, and it looks pretty sleek. If you have the cash and can manage it, then donate here to help make these renderings a reality. High-rollers who donate $25,000 will earn breakfast for life, but there's some other fun incentives for those who don't have that kind of coin to drop.

The new Link light rail stations (U District, Roosevelt, and Northgate) were all down between 11 am and 5 pm today. According to MyNorthwest, the culprit was a "fire safety system outage." So, at one point today we had three down stations along with the down escalators at the International District/Chinatown Station, the down escalators in Westlake Station, the down elevator in Beacon Hill Station, and the down elevator and escalators in Capitol Hill Station. Sound Transit, "I'll tell you once more before I get off the floor / don't [always] bring me down / No, no, no, no, no / Ooh-ooh-hoo."

Russian threatens to go nuclear if Sweden and Finland become a part of the North Atlantic Treaty Organization (NATO), an organization that should have been dismantled in 1991, the year the Warsaw Pact was dismantled. And why wasn't it? Because a major function of the capitalist state is to remove large amounts of surplus capital from the economy. For half a century, NATO offered the US state a sink-source for this surplus. It just could not let go in the way the new capitalist state of Russia could. As always, it was Marx who first sensed something of this necessity when he wrote in the Grundrisse: "The impact of war is self-evident, since economically it is exactly the same as if the nation were to drop a part of its capital into the ocean."

A damaged Russian warship with big guns and everything sank into the Black Sea.

Uncle Sam wants YOU (in debt):

The GOP has voted to no longer engage with the Commission on Presidential Debates, a bipartisan organization that was formed in 1987. The reason for leaving? RNC chairwoman Ronna McDaniel: "It's biased..." Meaning, it asked questions that were too tough for Trump.

Always pay attention Letitia James, New York's AG. She doesn't play. What's causing gas prices to go up? Corporate greed. What did you think? Was it a matter of supply and demand? Too much money chasing too few goods? You really believed all of that scarcity nonsense they teach neoclassical economics? Also, James is black. And blacks have a long tradition of getting into good trouble.