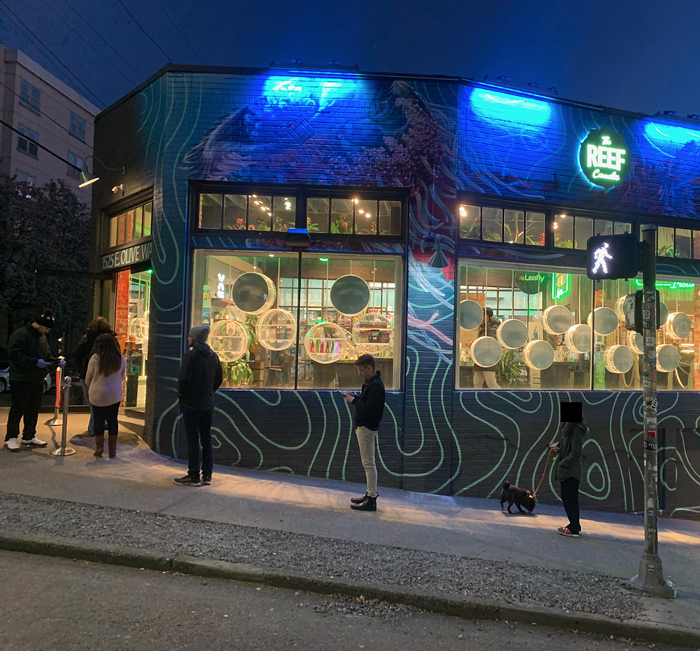 People used to go to jail for this shit, and now cannabis workers want to rectify the racist history of the drug war CHRISTOPHER FRIZZELLE
It’s 4/20, and no council member is celebrating harder than Councilmember Teresa Mosqueda. Although she didn’t tell me what (or if) she’d be smoking on this most festive day, she said in Monday’s city council briefing that she planned to attend North End community events in celebration of weed and workers' rights.

Mosqueda has been on a cannabis equity kick all year. It wasn’t a particularly fantastic edible that got her interested in the topic, but rather a joint effort (pun intended) with the United Food and Commercial Workers (UFCW), who proposed a draft policy on cannabis equity in January. UFCW’s major recommendations included expunging cannabis records, creating an “equity tax” on weed, and – in true Seattle fashion – creating a commission.

After months of meetings, panels, and general “stakeholdering” in Mosqueda Housing and Finance Committee, the council won’t be able to celebrate 4/20 with a new suite of cannabis laws. However, even though the “timeline is unclear,” Joe Mizrahi, the Secretary-Treasurer at UFCW, said the union’s proposal is “moving in the right direction.” And organizers around cannabis at UFCW said it's about damn time.

“Seattle was one of the first major metropolitan areas to legalize cannabis, but hasn’t adopted any of the cannabis equity policies that other cities have. We’re playing catch up,” said Matt Edgerton, cannabis division director at UFCW. 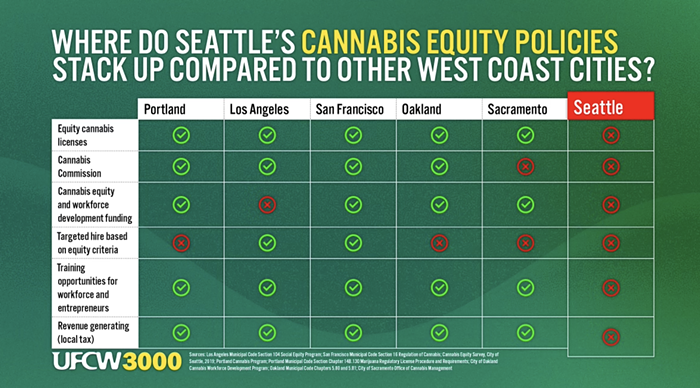 Seattle is a bit behind, indeed Courtesy of UFCW
Expunging cannabis records

As fun as it is to kick back and smoke a joint with your friends on 4/20, advocates for cannabis equity ask today’s potheads to recall the racist history of the war on drugs. Cops disproportionately targeted Black and Latino people for possessing weed before lawmakers legalized it and made it a huge business. Even though weed is legal and practically everywhere, many people still deal with the consequences of drug war-era charges on their record. (And make no mistake – the state still hasn’t let up on that war, it just no longer includes pot as often.)

In a presentation about its proposed policy, UFCW acknowledged strides to expunge cannabis records. For example, in 2019 the State Legislature passed a law that allowed those convicted of marijuana possession to apply for judges to clear those misdemeanor convictions from their record. That law followed a similar measure in Seattle, where in 2018 Seattle Municipal Court judges vacated convictions and dismissed charges for misdemeanor possession prosecuted before weed was legalized in Washington, impacting about 500 people.

Now, Edgerton said UFCW wants to see expungement for felony marijuana convictions, which can affect someone’s chances of finding a house and a job, and even of winning a custody battle.

While Edgerton said this aspect of the draft policy is not as clearly tied to the work of the union, he said workers wanted to pay respect to the people who the criminal justice system punished for working with the exact same plant.

“Workers don’t want to leave anyone behind as we progress forward,” Edgerton said.

UFCW also proposed an “equity tax” of 25 cents on flower, $2 per half gram, and a penny per milligram of THC in other products like brownies and gummies. Based on 2020’s weed sales, UFCW projected that the sales tax would raise about $5 million a year.

One issue: UFCW is asking Teresa “Progressive Revenue” Mosqueda to sponsor a regressive tax on consumers. Mosqueda did not respond to my request for comment on the regressive tax proposal, but I will update if she does.

Kristen Beifus, Community Organizing Director at UFCW, said the union took inspiration for the equity tax from one of King County Equity Now’s (KCEN) eight “Cannabis Equity Now” demands, specifically the demand to reallocate the cannabis tax revenue in the State General Fund to an equity fund. Beifus said UFCW could not find current money from weed sales in the city budget to reinvest in BIPOC communities, so the union proposed a sales tax, which other cities have implemented.

Edgerton said the city could try to impose a tax on business owners rather than on consumers, but he predicted that either way bosses would pass on the cost to consumers, citing the sugary drink tax as an example. Edgerton didn’t seem to think a small tax would be a big deal, because Washington has pretty cheap weed relative to other states.

Because it's Seattle, we have to talk about a commission

The money from the tax would pay for the Equity Commission, which Edgerton described as the “meat” of the proposal. UFCW based this commission on the city’s Green New Deal (GND) Commission, which, as we all know, solved climate change late last year. All joking aside, Edgerton said the union based the commission less on the results of the GND Commission, which he said he could not speak to, and more on its structure.

UFCW proposed a 15-seat commission with five members harmed by the war on drugs, five cannabis workers or representatives, three cannabis business owners, and two workforce development representatives. All of these members can request compensation for their time, a stipend of $75 an hour.

This commission would basically do what UFCW spent the last year and a half doing: “Run a community-centered process” and figure out which policies this city needs to implement to right the wrongs of the drug war. The proposal would also task the commission with diversifying Seattle’s booming, white-dominated cannabis industry.

Edgerton said he has no expectation for when these proposals will come to fruition, but even if they passed tomorrow the work around cannabis equity would be far from over.

“There will never be an end to addressing the war on drugs. These policies are not a silver bullet. It’s a step,” Beifus said.