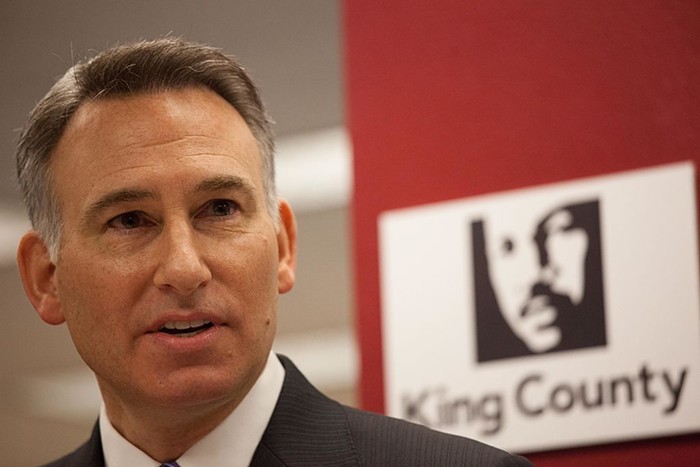 Just waitin' on this guy to act on the recommendations. DAVID RYDER/GETTY IMAGES
Yesterday, the King County Executive’s Office released the results of their Reimagining Public Safety survey, which broadly found that residents of “urban unincorporated King County” want alternative options to an armed police officer when they call 911. The County commissioned the survey as part of an ongoing effort to improve public safety for people living in unincorporated areas, which means the King County Sheriff’s Office is the agency that polices their communities.

For people living in Skyway, White Center, Fairwood, East Renton, and East Federal Way, this survey presented a chance to help “co-create” alternatives to having an armed cop respond to most emergencies. After reviewing their answers to the 31-question poll and also answers given in several focus groups conducted in partnership with community-based organizations, the County will be spending roughly $500,000 on pilot projects that provide those alternatives.

If you’ve managed to skim a newspaper headline while in line at a coffee shop, glanced at a CNN chyron in the airport, or just been alive and cognizant of the world around you for the last two years, the feedback captured in the survey won’t surprise you.

For starters, more than a third of respondents told the survey authors that they’ve avoided calling 911 during an emergency, largely out of fear for the safety of the person who needed help if a cop showed up. And while a majority of respondents countywide reported some level of trust in law enforcement, the survey captured some depressing contradictions in how people view cops’ behavior on the job. For instance, 76% of respondents said they believed police largely “act within the law” but only 65% said cops use an “appropriate amount of force.” That means 11% of respondents apparently believe cops beating the crap out of people is totally legal, which seems … not great as a measurement of community trust in police.

Drawing broad conclusions about public opinion from survey data like this can be dicey, especially on contentious issues like finding ways to resolve heated arguments without calling an armed agent of the state to “mediate.” Just last week, for example, the Seattle Police Department trotted out its own community survey, conducted in partnership with Seattle University researchers, claiming that people across the city wanted leaders to hire more cops. But as DivestSPD pointed out on Twitter, that survey solicited respondents through NextDoor and dramatically oversampled well-off, white homeowners – not exactly representative of the population who has first-hand exposure to SPD’s officers.

By contrast, King County’s survey seemed to actually reach the population who have real, lived experience with the failures of police to make people feel safe. The more holistic approach of including focus groups facilitated by community-based organizations and better targeting in digital advertising should give policymakers confidence that this data is representative of what the people want. And what they want is clear: More than half of the written comments from people surveyed expressed a desire to have an unarmed behavioral health professional available to respond to emergencies.

Now that the community has made clear what they want the County to invest in, all that remains is to see whether the County follows through on the survey’s recommendations. That will take at least a few months, as the pilot programs the County has promised to develop based on this report aren’t scheduled to roll out until the helpfully vague “mid 2022.”