Get in losers, we're standing up for survivors. HK
On Friday afternoon, hundreds of students gathered at Wallingford Playfield to support victims of sexual violence and call on the Seattle Public Schools (SPS) District to take action to do the same.

During the sixth class period, a handful of student speakers, one after another, came up to a small podium surrounded by Lincoln High School (LHS) students to accuse SPS of “hand-waving,” “gaslighting,” and overall “failing” survivors of sexual assault. 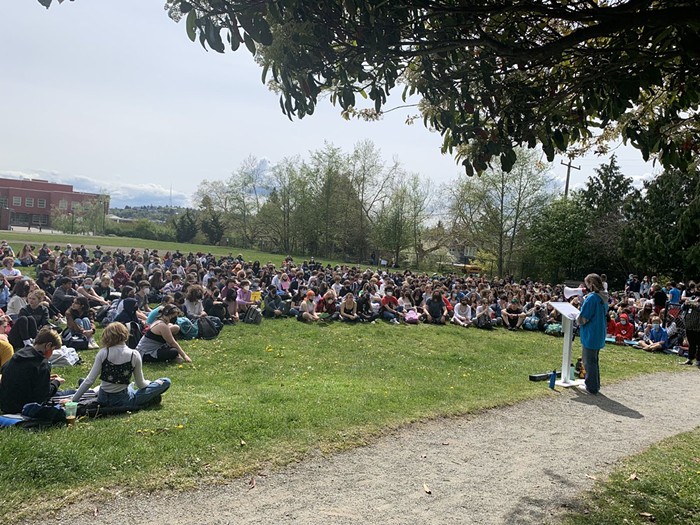 One organizer said he thinks about a quarter of the school ditched sixth period to come to the rally. HK
One speaker opened up about her past sexual assault and how she worries for her younger sister, who is now the same age she was when a life-altering experience left her “afraid to walk alone.”

“One thing I learned about Lincoln is they don’t protect us. They give the assaulter more power than the victim. It’s not fair that a three-day suspension is equal to a lifetime of fear.”

A group of high school students known as Lincoln Against Sexual Assault organized the rally in response to what they describe as a long history of SPS ignoring victims, but a recent incident was the straw that broke the camel’s back.

Earlier this month, a LHS student took to social media to accuse another student, who holds a student leadership position, of sexual assault. Student organizers said four other students levied accusations against the same student.

According to an email from Principal Ruth Medsker to the LHS community, the administrative team handed the reported information to the district’s Title IX Office, as is the district’s policy. Since the alleged assault happened off-campus, SPS cannot investigate and the case is in the Seattle Police Department’s hands.

But some students want to see action from the school itself. On April 7, LHS students sent the administration an email that included a petition of over 200 sophomores’ signatures, collected in just one day, demanding that the district’s Title IX coordinator oversee the student’s investigation. They also requested that the Class of 2024 Council move to administer a “vote of no confidence” to boot the accused out of office without interference from the administration.

The students said they didn’t want to debate the accused student's guilt and made it clear to signatories that SPD was still investigating. Still, the students wrote in the email that the petition demonstrates that “the Class of 2024 does not want someone accused of a crime–regardless of their guilt–to be the face of our class.”

The petition did not land well with the Title IX coordinator, Natasha Walicki.

The following evening, Walicki responded: “The District takes these concerns seriously and has responded in line with SPS policies and procedures.” She continued with a common move by school administrations – pointing out that the students’ efforts to stand in solidarity with an alleged victim violates the district’s Harassment, Intimidation, and Bullying (HIB) policy. Since the district has an “obligation to both alleged victims and alleged aggressors in ensuring we respond appropriately to concern,” Walicki told the students to stop the petition and said that in her other role as the District’s HIB Compliance Officer, she would be working with LHS for any “necessary next steps.”

One organizer at the rally pushed back against the bullying accusations. He said, “This is not ‘high school gossip,’ this is serious,” and that the adults left them no choice but to deal with it themselves.

Other area schools have followed the same playbook. When a student at a Bellevue high school accused another student of abuse last fall, she felt ignored by the administration, so her classmates rallied around her and staged a walkout. The school expelled the alleged victim and a handful of other seemingly random students involved in the walkout. Students from that school and LHS argued that punishing victims for dealing with trauma in a way that breaks a school policy further perpetuates a culture of silence around sexual assault.

While the accused LHS student resigned from his student leadership position last week, the incident highlighted what students see as an urgent need for the district to do better by victims and survivors. During Friday’s rally, students presented four clear demands: consent training twice in high school, clearly outlined punishment for sexual assault, a designated person students can report sexual assault to, and a more positive environment for victims.

The student organizers said that the school agreed to work on some of their demands before they resorted to a walkout. As it stands, the high schoolers get one consent training, and the school is working on getting a second in partnership with the students.

As for the other demands, the students said the administration used “too much red tape” as an excuse. The students don’t buy it.

I asked SPS for a statement, and they responded with a copy of an email to LHS students. LHS Principal Medsker reiterated in the email that the school “takes student concerns around sexual misconduct seriously.” The email also instructed students who participated in Friday’s walkout to fill out a “civic engagement activity excused absence form.”

“This is a large societal problem, and we are tackling this issue on many fronts in collaboration with students, families, and central office,” wrote Medsker. “We appreciate your support as we navigate this complex issue.”