The rally organized by Kshama Sawant and socialist orgs drew a huge crowd to Westlake. HK
For the most part, Seattle leaders, advocates, and residents agree that anyone with a womb should have the right to an abortion, but when a draft of the U.S. Supreme Court decision on Roe v. Wade leaked Monday night, the two biggest rallies on the following day told completely different stories about how we must proceed. One rally encouraged people to trust the institutions in place even as they appear to crumble around us, the other encouraged people to burn the whole damn thing down.

On Tuesday afternoon, Gov. Jay Inslee, Attorney General Bob Ferguson, and other elected Democrats gathered at Kerry Park to “assert and affirm that Washington state remains a pro-choice state.” While the Democrats garnered a big enough crowd to warrant police security, the mid-afternoon start time made it difficult to attend for working people who were likely, well, working at 2:30 pm on a Tuesday. Further, Kerry Park sits away from most major transit lines, and it is far too small to accommodate every member of Seattle’s considerably large pussy-hat army. But at least they got the Space Needle in the background of those pictures! The Space Needle of county government. HK
The press conference accomplished four things: Signal disgust at the decision, blame Republicans, comfort the Democratic base, and, most importantly, encourage Ds to turnout to elect pro-choice Democrats.

“Every speaker talked about the importance of voting, particularly in light of this pending Supreme Court evisceration of this American right. I do want to note we are not advocating to vote for any particular person or party,” Inslee said, all but winking.

The crowd responded with a knowing laugh. After all, Rep. Pramila Jayapal called the Supreme Court’s ruling the “culmination of decades of insidious work from Republicans and the extreme right that rigged the system in their favor.” 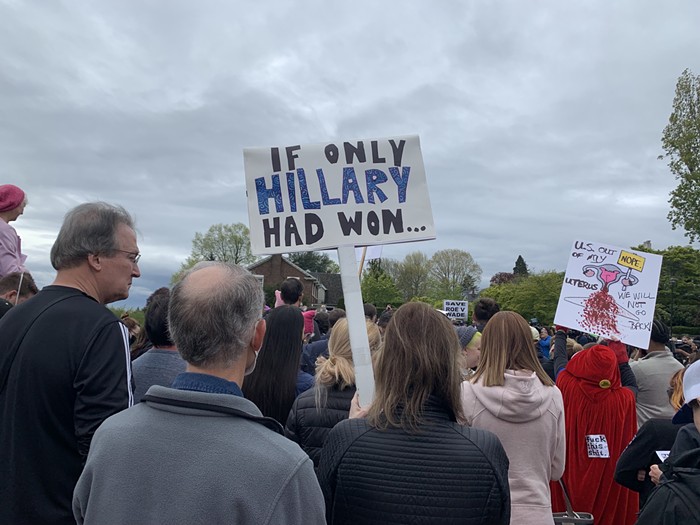 "..." indeed HK
While Ferguson told Washingtonians not to worry about the court ruling, Inslee suggested that if we do not elect people who will stand up for women’s rights (read: Democrats), then women may lose those rights altogether.

Inslee topped off his pitch to voters by pointing to a seemingly random woman in a pink pussy hat in the audience, calling her up to the podium, and declaring her “Washingtonian of the Day,” an honor he said he gives to individuals who inspire him.

He plucked his Governor’s pin off his coat and pinned it to hers. 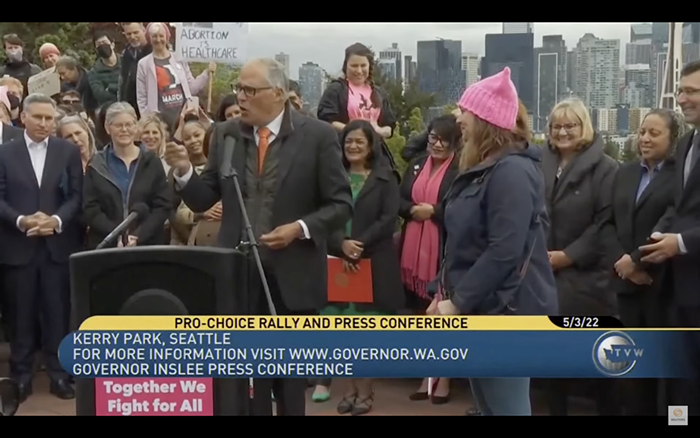 The lucky pinner. HK
“I know she's gonna go back and she's gonna find every young person who could spend their day on the couch in November. Instead, she's going to get them to vote,” Inslee said to a round of applause.

But from the looks of that evening rally in Westlake, those young people don’t want to vote for Democrats. And they’re not on the couch, either.

westlake rally is quite a different scene than the dems presser in kerry park. pic.twitter.com/p5O5EyT8V9
— hannah krieg (@hannahkrieg) May 4, 2022

Councilmember Kshama Sawant and her party, Socialist Alternative, called thousands to gather at Westlake Park Tuesday evening. In coalition with Radical Women, Seattle Democratic Socialists of America (DSA), and Rise Up 4 Abortion Rights, the Westlake rally sent quite a different message compared to the Democrats.

“Instead of serious calls to mass action, we are seeing fundraising emails and pleas to vote for Democrats in November,” said Sunny Rao, a member of Seattle DSA.

Rao noted the difference between the day’s two major events. She said the Democrats were interested in a photo op and in “pacifying” their constituents, while the more radical advocates at Westlake wanted to fight back with a working-class movement.

Despite one unfortunately placed “Vote Like Hell” sign, the rally championed the belief that we cannot wait for Congress, we cannot wait for the Biden administration, and we certainly cannot wait to elect more Democrats who failed to codify Roe v. Wade in the 50 years since it became law.

Some speakers at the event suggested packing the court, ending the filibuster, and passing the Women’s Healthcare Act. While making those changes would require actions from within the current system, according to Sawant and congressional hopeful Stephanie Gallardo, our vote for Democrats can only go so far. The best way to defend abortion access is the way activists initially won it: A mass movement that pressured, in Sawant’s words, a “majority sexist” Supreme Court even under a conservative president.

With these two distinct paths forward, even in a firmly pro-choice city, the conversation about the leaked decision has caused tension between political insiders and the city’s radical thinkers. Councilmember Teresa Mosqueda, who sometimes toes the line between the two camps, said that movement-building and electoralism is a “false dichotomy.” In a phone interview, Mosqueda said she encourages protest, but she argued that electeds will also have to work within the system to secure abortion rights.

Sawant warned against Mosqueda’s brand of progressivism, which at times aligns with the radicals but still relies on Democrats in office to deliver. Sawant asked the event's attendees to carry into this emerging struggle the lessons activists learned during the resurgence of the Black Lives Matter movement in the summer of 2020.

“We could have won more had a section of BLM leaders not tied their hopes to the Democratic party, who in the end totally sold us out,” Sawant said.

While the radicals call the party a lost cause, many remain hopeful that they can work with your everyday liberal neighbor. Gina Petry, president of Seattle Radical Women, said the socialist feminists in her organization have often worked in coalition with liberal feminists to advocate for similar goals. Petry said in a phone interview that more mainstream reproductive rights organizations have been joining on to their more-than-a-yearlong campaign to protect abortion rights, some just in the last few weeks, as though realizing the severity of the state’s attack on bodily autonomy required widening the tent.

A canvasser from Socialist Alternative, Ellen Anderson, saw a similar hunger at the Kerry Park event, after looking past the Handmaid’s Tale cosplayers and the “If Only Hillary Had Won...” sign.

“These are flying out of my hands!” Anderson said as yet another Kerry Park attendee pulled an SA flier from the stack. “It’s nice to know this energy is out here.”

Councilmember Andrew Lewis Guts His Own Policy, Excluding Thousands of App-Based Workers from a Minimum Wage

The Stranger's Endorsements for the November 2, 2021, General Election