A set worth a thousand words. Tracy Martin
Even before one of the main characters steps onstage to announce the show's theme (and its suggested marketing copy) — "This is a story about stories..." — Carey Wong's incredible set tells you everything there is to know about Afterwords, a brand new musical that premiered over the weekend at The 5th Avenue Theatre.

Wong created a vertiginous, three-story house that's as haunted as every one of its inhabitants. Though the set rotates at times to reveal a newsroom and a war zone, it's mostly a big, old, dusty home towering over the actors and bursting with undiscovered secrets. Shelves overflow with books, journals, toys, trophies — all as impossible to organize as feelings of grief after an incalculable loss.

As it happens, two such losses initiate the action in Afterwords, setting off a chain of events that reveal hidden connections between the characters as they work through their grief. But if only the show was as good as its set! Though the members of the cast preformed their roles with élan, only a couple of the ~5,000 songs (22) in this show really hit on a first listen, and gobs of overly earnest spoken subtext undermined the complexity of the relationships.

The show's creators — lyricist Zoe Sarnak and playwright Emily Kaczmarek — avoid the heteronormative cliches that attend many family dramas, but otherwise they really pile it on. They give us a grizzled war correspondent who's married to his job (Jimmy, played by Brandon O'Neill), a cool single mom who drowns her sorrows in drink (Lydia, played by Mari Nelson), a queer journalist with writer's block (Jo, played by Anastacia McCleskey), a supportive gay best friend with incredible fashion sense (Franklin, played by Saxton Jay Walker), a shut-in songwriter with the magical ability to immediately translate intense emotional experiences into pop music (Kali, played by understudy Eliza Palasz), and a queer, free-spirited artist in danger of flying too close to the sun (Simone, played by Kerstin Anderson). 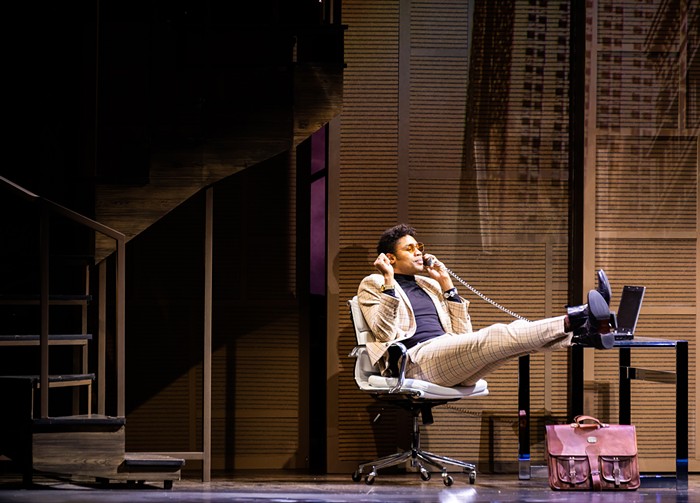 As this photo makes clear, Walker nailed the role of the supportive best friend with unimpeachable style. Mark Kitaoka
Loss and parental strife link all the characters together, and each cycles through readily recognizable stages of grief until they accept that grieving is a lifelong process, and that each day is, you guessed it, a gift. Then someone — director Adrienne Campbell-Holt? choreographer Ebony Williams? — drives home that lesson in a finale full of half-hearted, awkward choreography; a little step here, a little step there, a sweeping arm gesture, rinse, repeat.

With a few exceptions, Sarnak's music sounds more like a pastiche of rock, indie rock, and pop than actual examples of the genres, and a lot of the songs focus on plot stuff, all of which makes it difficult to hear the them as avenues for the characters' deeply felt emotions. That said, those exceptions do stand out.

Wordplay appropriately drives the show's opener, "After," which nicely introduces central themes. "Lonely-Hearted People" follows shortly thereafter, and it serves as the song Kali, a Grammy-nominated singer-songwriter, tries to piece together out of the fragments of her ruin throughout the show. That song is extremely catchy. Dangerously catchy. I caught myself singing it during idle moments all weekend. I'm doing an embarrassing chair dance as I think of it now, noting some admiration for the irony inherent in a poppy song about loneliness, one that enacts one of the musical's major themes, i.e. the power of art to heal. It may never leave me, and I'm fine with that.

(L-R) Simone and Jo's courtship was hot and fun, but it could have used a little more attention in the fallout phase. Mark Kitaoka
But I will not mourn the day when the memory of "The Process" dancers leave me. I cannot blame the performers who played "The Process," a group of dancers and singers who embodied the process of grief that connected all of the characters. They did a fine job variously serving as chorus members, anger translators, and guardian angels, romping around the stage and supporting the characters during their moments of intense feeling. But their existence pointed to an intense feeling I couldn't shake, namely the desire to see this 2.75-hour musical in the form of a tight-90 stage play.

If "The Process" dancers weren't there, the stage would've looked too empty most of the time, and that emptiness would raise questions about form and function. For me, the demands of the genre flattened the dialogue, and the songs didn't make up for the loss of that depth, which turned what could have been a complex story into a series of saccharine scenes. A smaller stage would have put more pressure on the language, giving the actors something to work with other than a lot of big, bland, overdetermined lines. Even cutting half the songs and improving the dialogue could help reduce the runtime while giving the better lines space to breathe.