Finally, a Crime Dashboard You Should Care About 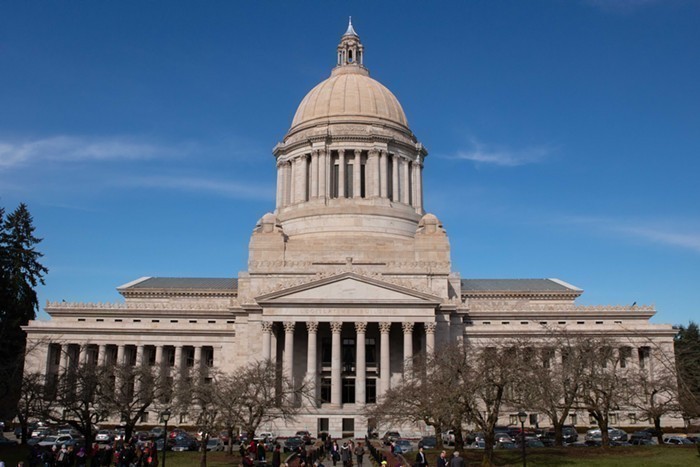 State lawmakers are already making use of the data to inform decisions on reforms to the criminal legal system. Lester Black
Any casual observer of our local debate on public safety will know that dashboards are all the rage these days. Mayor Bruce Harrell campaigned on his love of data visualization. The Purge cosplayers over at the Seattle Police Officers Guild can’t get enough of them.

But not all dashboards serve to shield those in power from the responsibility of articulating a meaningful policy position. The folks over at the American Equity and Justice Group have put together the nation’s first public database of an entire state’s adult felony convictions, and they’ve teamed up with a crew of extremely based Microsoft hackathon volunteers to make accessing the data incredibly intuitive. 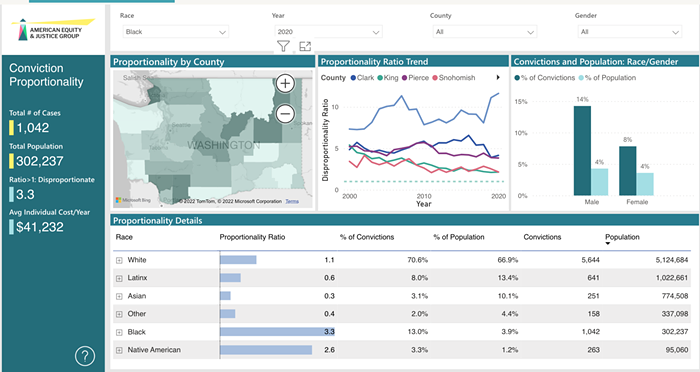 A view of the system's racial disparities.
As The Stranger previously reported when AEJG was still beta-testing its dashboard, the Seattle-based nonprofit was the brainchild of Anthony Powers, the formerly incarcerated Reentry Program Director of the Seattle Clemency Project. He first engaged with the problem of collecting conviction data when he noticed an odd commonality in the academic studies he read on sentencing reform: The papers usually referenced a timeline of several years to collect, code, and break down the data.

That meant policymakers, even those with good intentions, frequently operated with old or outdated data. Now they will do so no longer. With the release of AEJG’s dashboard, legislators, judges, lawyers, and the public can now sift through the largest and most current dataset, capturing every public adult felony conviction from 2000 to 2020. The tool allows users to slice and dice the dataset by offense type, race, year, county, gender, and even the individual judge who issued the sentence.

In a phone interview, Kim Gordon, a criminal defense lawyer who serves on AEJG’s board, emphasized that looking up individual judges and posting screenshots to Twitter of racial disparities in their sentencing decisions was not the best use of this tool. She stressed that the data presented doesn’t capture the entirety of the criminal legal system, and it requires some context to properly interpret. For example, a judge might be assigned to a particular court calendar where she spends all day signing off on plea deals agreed to by both the prosecutor and defendant, leaving little room for judicial discretion. The dashboard also wouldn’t reflect the totality of work from judges who oversee pre-trial diversion programs that allow defendants to complete community service or other court-mandated treatment in exchange for dismissing their cases.

And, according to Anthony Powers, that sort of “gotcha” attitude isn’t helpful to folks like him working to mitigate the structural racism of the criminal legal system overall. In his view, presenting this data without accusing specific decision-makers of discrimination creates the psychological room necessary for those judges to accept the reality of the impact their actions have on defendants of color. By emphasizing that the system disproportionately impacts people like him regardless of the intent of its operators, Powers said he’s had nothing but positive receptions from judges confronted with the reality of the data.

While all of this might seem like a lot of digital ink to spill over what ultimately amounts to a fancy Excel spreadsheet embedded in a website, the impact of this kind of reliable data is hard to overstate.

State Senator Manka Dhingra, a King County prosecutor who helped provide feedback on the project in its prototype phase, explained in a phone interview why she finds the tool so valuable. In the wake of the Blake decision from the Washington Supreme Court, she and her colleagues in the Legislature used this tool to determine the exact number of people who would qualify for resentencing. That process allowed the state to appropriately budget for the additional money needed to ensure that no one would fail to have their case heard because the Legislature didn’t have accurate data.

She expressed even more excitement about the potential of the dashboard as AEJG continues to add more data that captures the entirety of the criminal legal system – particularly areas where anecdotes and rumor govern decision-making. In her work with survivors of domestic violence, for example, Senator Dhingra said people routinely rely on word-of-mouth to know which judges tend to grant urgently needed protection orders and which seem generally more skeptical of the process. With access to a dashboard that objectively captures trends in those kinds of cases, she said, prosecutors could better identify which judges need additional education on those programs and which could better direct survivors with a particularly urgent case towards decision-makers most likely to understand their situation.

Although that feature isn’t available yet, AEJG lays out ambitious plans for the future. They want their Microsoft volunteers to spend their next hackathon building a tool to display data for every point at which a criminal legal actor exercised discretion over the last 50 years. If you’re a software engineer who wants to volunteer, or if you just want to meet the people doing this work and say thanks, RSVP to their launch event for the project at Seattle University’s law school on May 17th.