Bar Manager Justin Fox’s Hayao Miyazaki-Themed Cocktail Menu Is Bold, a Little Bizarre, and Perhaps Not for Everyone. But It Might Be for You. 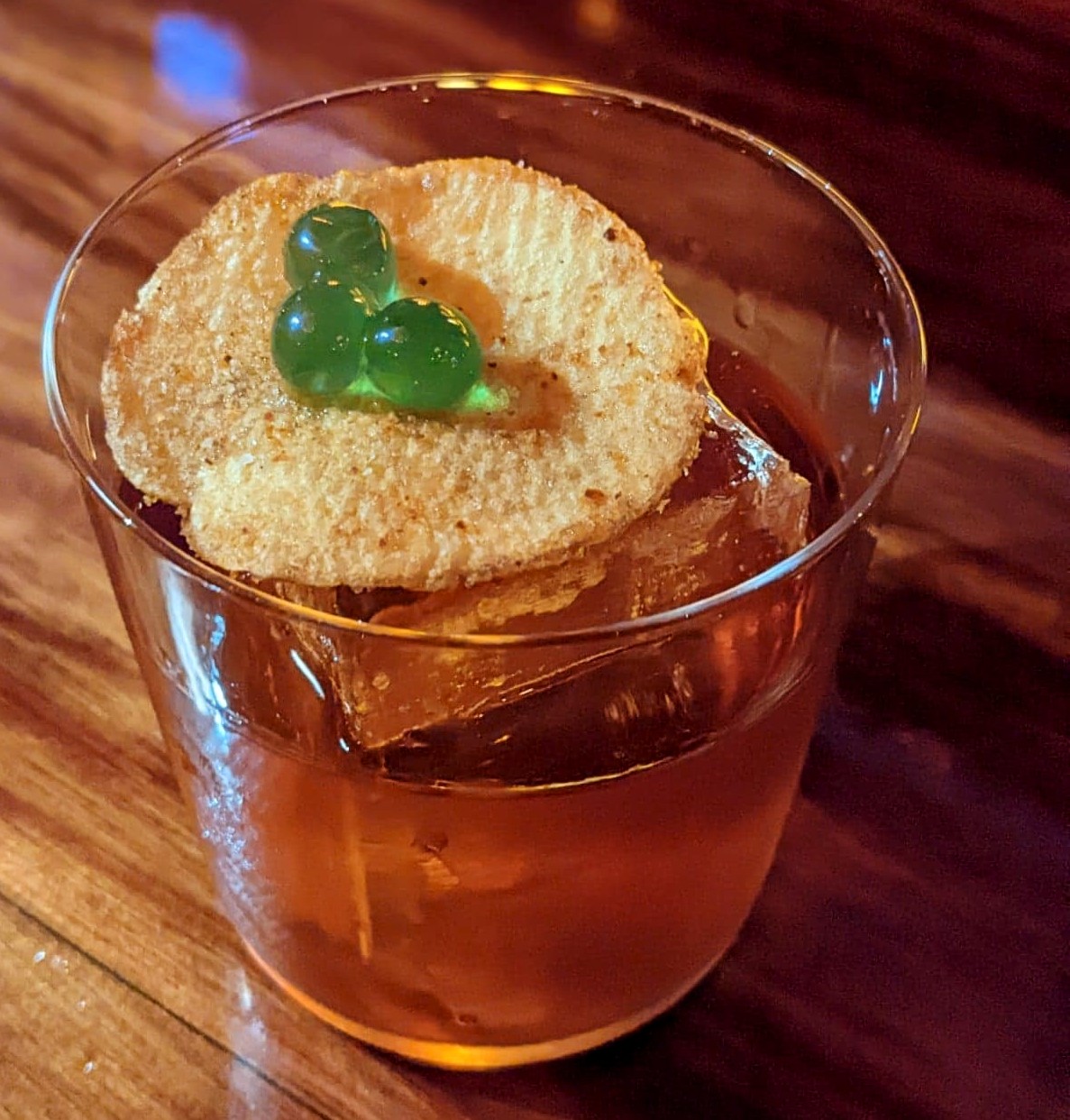 The Ohmu Negroni has sotol, cocoa, spiced pear, Angostura amaro, and absinthe. You wouldn’t think it would make a Negroni, but it does, it does. Meg van Huygen

I thought about this cocktail for a really long time before I tried it.

On Ballard Avenue, in the old Bastille space, Bar Sabine posted their Hayao Miyazaki-themed menu near the garden entrance sometime in the summer, and the Ohmu Negroni caught my eyeball as I passed by. Someone inside this building had the absolute balls to combine Angostura amaro, absinthe, sotol (!), pear (?), and cocoa (???), and then call it a Negroni?

Uh, without vermouth or gin? Has this person ever been in the same room as a Negroni?

I accepted the switcheroo of another amaro for Campari, and absinthe, fine, it’s probably just a rinse… but the rest seemed like fucking opposite day on the moon. How could it even resemble the hallowed Negroni with something as powerful as sotol in the mix? And all this other unorthodox stuff in there besides?

…However. I would rarely resist the combination of pear and cocoa in daily life. And the addition of super-distinct Mexican sotol, similar to mezcal but made from the desert spoonflower, that part actually sounds so good. “I would probably drink the shit out of this,” I thought, “if it didn’t say Negroni on it.”

The other thing about this cocktail is that it costs eighteen dollars. This goes against my whole cocktail belief system. Food insecurity is rampant in our cartoonishly expensive city, and it seems obscene to be dropping a twenny-plus on a fucking drink, what with tax and tip. A person could live for a week on eighteen dollars worth of groceries, for godsake, if you’re talking dry beans and pasta. Even if yer dining out, eighteen bucks can buy several meals on the Ave—that’s four barbecue pork hum bows or at least two bánh mìs. Here, we’re being asked to trade this amount for a single cocktail. Is this bar just being frivolous, or is there something I don’t know about this drink?

The short answer is yes, there are many things one can’t know about this drink from reading the menu, and yes, it tastes an awful lot like a Negroni. And yes, it’s really good! I can’t say whether it’s worth eighteen dollars, because everyone’s tastes and finances are different. I’m personally glad I traded eighteen of my dollars for one. The Ohmu Negroni paid me back in delight bucks, as well as some important educational cocktail tidbits that I didn’t know I didn’t know.

First of all, the cocktail arrived with a potato chip on top. Faintly spicy in a green-tasting way. There were three pea-like bobas balanced on top of the chip, not the tapioca kind but the ones filled with fruity juice that burst in your mouth. I thought they were tiny gooseberries at first. What does it mean?

“Well, we used to have these lotus chips,” bar manager Justin Fox explains, “and they were really tasty. So we’d put the bobas in the holes in the lotus chips, so it looked exactly like the Ohmus! And we put those on top of the drink.”

Oh, right. The blood droplets on the Ohmus! The Ohmus, as you know because you’re a nerd, are the roly-poly giant insect creatures with blood-like droplets all over them from Nausicaä of the Valley of the Wind (1984), Hayao Miyazaki’s first anime film. Although these were green kiwi bobas, I guess the Ohmus have various-colored ones in the movie? (I only know this because I just looked it up.)

But then the bar ran out of lotus chips. “I was buying these things through Instacart every other week, because I couldn’t get down to Uwajimaya, and a lot of times, you just couldn’t get ‘em online or at the store!” Justin laments. “And they’re super expensive. So we switched to potato chips that we make on-site. But that was my original idea here.”

The replacement chips are made in-house, seasoned with Fresno chilis. “We ferment ‘em, make a paste, and put it in the dehydrator, then add seasoning and malt vinegar, then toss the chips with that and sea salt. So it’s not the same effect as the lotus chips, but whatever. It’s still a fun, spicy-sweet flavor.”

Okay, sure. It’s weird as hell to see a chip perched on your drink with li’l fruit bobas rolling around on it, especially if you don’t have any context, but also sort of thrilling. “The fuck is this?” followed by “Hell yeah, free chip.”

Apart from the chip ‘n’ boba, the cocktail itself looks for all the world like a Negroni, and the strongest flavor is the amaro, like a classic Negroni’s is. Sotol brings some char and tang and funk in the bass like Bootsy Collins; the licorice note from the absinthe is high and clear. The pear and cocoa tones are there too, although the cocoa’s a little dim, and one flavor is gradually overwritten by another as you sip. But the cumulative effect is indeed like unto a Negroni. A slightly smoky, peary, chocolatey one. My god, it’s alchemy.

How’d you arrive at sotol, though, Justin? “Well, then the drink kind of had to represent the gassy miasma of the universe in Nausicaä. So I went to the funkiest flavors I could come up with. I immediately thought of sotol!”

You can see his point. Sotol’s got elements of the gin that it’s pinch-hitting for: bright, floral, herbal, with that piney conifer scent. But it’s also briny, smoky, earthy, and yeah, funky. Like a postapocalyptic miasma, as Justin says.

The sotol, he adds, is handmade by Por Siempre in Chihuahua, Mexico, at a distillery operated by the Jacquez family for five generations. “That’s actually part of the price point—this specific sotol. There’s very few other sotols that I would use to pour a cocktail, and this one has the funky profile I wanted.”

After all this build-up and melodrama and a few sips…I’m sold. The Ohmu Negroni’s not at all what I expected; I thought it’d be 50 percent pear juice with a maraschino cherry and a dusty little piece of dark chocolate on a toothpick, served in, like, a coupe glass, with a shy whisper each of amaro and absinthe. But it showed up on a giant rock in an old-fashioned glass, correctly, and it cosplays a Negroni very well. If you handed this to me and said, “Here’s your Negroni,” I’d be like, “Oh cool thanks,” and it would take me a sec to notice the briny-pine and the choco-pear and the fennel-funk. It’s sneakily delicious.

So, are people ordering this drink? Is it popular? Justin says no. “When we first started serving them, most got sent back. People didn’t know what sotol was. There was a part of me that was like ‘Well, maybe I went too far with this one,’ and I thought about changing it! And then, the more I sat with it, I realized, well, some things are not for everybody, and that’s all right.”

He points at the menu. “That’s why I added the warning.” I peer at the strip of paper in the dark bar.

Ha, this wasn’t on the street–facing version. “It’s all because of the sotol,” Justin chuckles.

He continues waxing on the fantastical grimdark universes of Studio Ghibli, which I’ve never seen any of in their entirety but I bet you have, and which ones inspired each cocktail on the list, and his enthusiasm radiates out in waves. It’s an honest joy to listen to him, and I’m not even a fan of this shit. Justin says he’s looking to trigger this same joy in his customers, and dude, it’s working.

As a cartoon ‘n’ comix geek, he tells me, he often shells out personally from his own pocket for all the little baubles and accouterments and fruit bobas and bespoke ice for each recipe, all of which are his own creation. He pulls out a box of what could be described as cocktail props and takes out a smiling piglet head, which goes in the Porco Rosso cocktail. “I want them to be perfect!”

“Growing up, I spent most of my life hanging out in a comic shop in Gary, Indiana, heh, so yeah,” he says. “It still informs my menus a ton.” He holds up some other props from the box: beer cans with the Spirited Away ghosties on them, pouches with Ponyo decals that he’s used to made boozy adult Capri Suns. “The point is just to have fun. There are some people who take their cocktail program way, way too seriously. I’ve lived in Chicago, I’ve lived in L.A., and even here…people are so serious about cocktails! They don’t seem to have fun with it.”

Justin also has strong opinions about ice, as any decent bartender will, which he cites as more backup as to why this cocktail costs what it does.

“I mean, the ice cube alone is a dollar-fifty to two dollars, and the price keeps going up for these large cubes. But the ice makes the drink! You gotta have great ice. It takes time to make this stuff—it would be a full-time job for someone else, just to make amazing-level ice in this volume. So we buy it.”

I mean. Makes sense. I do love a huge oversized ice cube. I had no idea they cost two dollars this whole time, though, jesus.

So, here’s the verdict: The Ohmu Negroni isn’t your usual overpriced-on-principle cocktail. It’s art, made from carefully chosen art supplies. The imported handcrafted sotol, the bobas, the housemade chips, the pricey ice. Justin Fox is a craftsman, and you’re buying a meticulous, geeky mini-artwork of his when you order a cocktail from his list. I’m not saying other bar managers aren’t doing this in Seattle, only that Justin is.

If you’re flinching at the eighteen bucks, that’s totally understandable—you can go a block up the road to the Smoke Shop and get toasted there for cheap, which I often do. I get it. As suspected when I first noticed this silly, strange, strident cocktail list, and which Justin later corroborated: Not everything is for everyone.

Took me a while to realize it, but it turns out that this weird-ass anime Negroni actually is for me. I had to try it to find this out. It just might be for you too.

Bar Sabine will serve this Miyazaki-inspired cocktail menu until “the holidays or so,” when it’ll be replaced by another fabulous menu by Justin Fox, so you have at least a month, maybe two. You can view the whole Miyazaki list here.

More In The Last Word 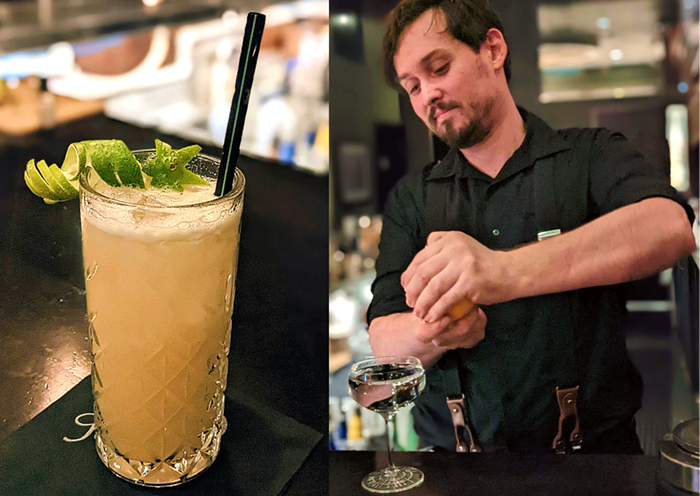