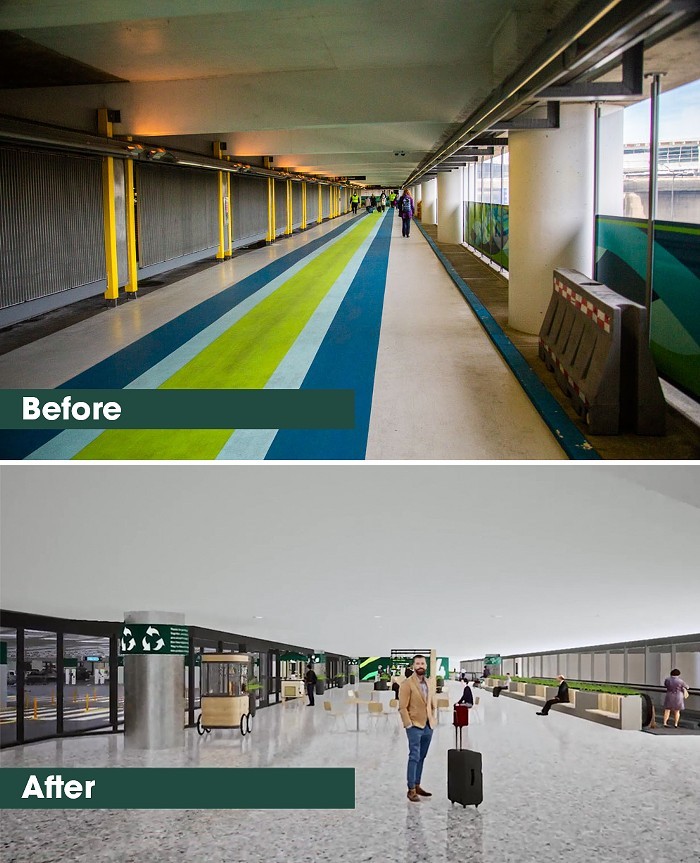 The Link light rail is hands down the best way to travel to the Sea-Tac International Airport ... until you hit the last quarter-mile, which requires a sprint through a cold, blustery, odorous, parking garage. And that journey only begins after you've decided whether to drag your heavy luggage down the long path, or else hazard a wait for a golf cart shuttle that may take forever to come.

Meanwhile, transit use at the airport is dismally low – only four percent of travelers take the light rail, according to Sea-Tac – and private vehicle use remains so high that they periodically run out of room at the parking garages, despite having the country’s largest parking structure under a single roof.

So why, after all these years, is the transit experience’s last stretch so unpleasant? And can’t they do anything about it?

Yes, actually, they can. Sea-Tac is planning something big and bold to replace that awful walk.

There have been some minor improvements to the walkway over the years – a coat of paint here, plexiglass barriers there — but various structural quirks prevent much more. Because the concrete floors support the structure’s weight, you can’t drill into them to install a moving walkway. You can’t elevate a moving walkway because the ceiling is too low. You can’t install heaters because of electrical and emission issues. And you can’t add more walls because of building codes relating to exits and fire suppression.

On top of that, Sea-Tac’s transportation contractor can’t hire enough drivers to maintain consistent golf cart rides between the light rail and the terminal. (They’re hoping to hire college students to drive the carts this summer.)

So, with the parking garage pretty much unchangeable, what option is left? An entirely new structure.

As part of Sea-Tac’s ongoing work with the Sustainable Master Plan, planners envision a whole new building taking the place of the current stop-gap passageway. The proposed new Ground Transportation Center would sit next to the garage, and it would be a clean, safe, comfortable passage between Sound Transit and the terminals.

“That would mean that you get off light rail and you immediately step inside the airport,” says Port Commissioner Ryan Calkins, a longtime advocate for more sustainable infrastructure. “It would be interior, so there would be retail running the length of it, and presumably we could then put in moving walkways.” 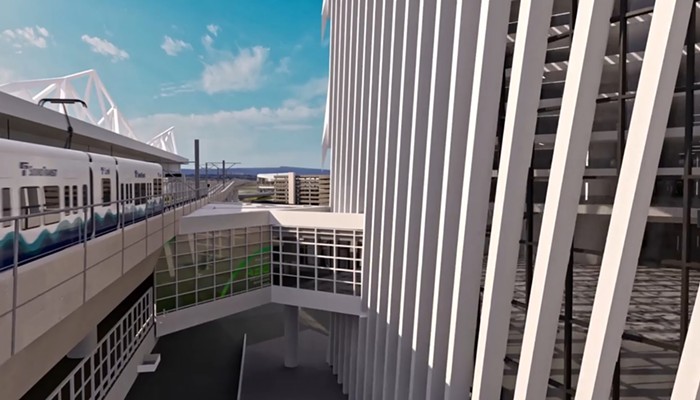 The current bridge would eventually lead into the new structure. Sea-Tac

Don’t get too excited about the plans just yet, though. It’s still just a gleam in the Port of Seattle’s eye, and similar improvements have been floated for years with only minor upgrades making it across the finish line. The current proposal consists of a few very preliminary documents and a tantalizing – but highly speculative – 3D render.

For now, Calkins says, federal officials are evaluating a draft version of the Sustainable Airport Master Plan, which includes over two dozen other projects. They’re hoping for feedback later this year, after which state review can get underway. Like the hike from the station to the terminal, it’ll be a long, slow, process – but hopefully there’ll be something great at the other end.