Have You Ever Wanted to See 100+ Artists Take Over a Building? 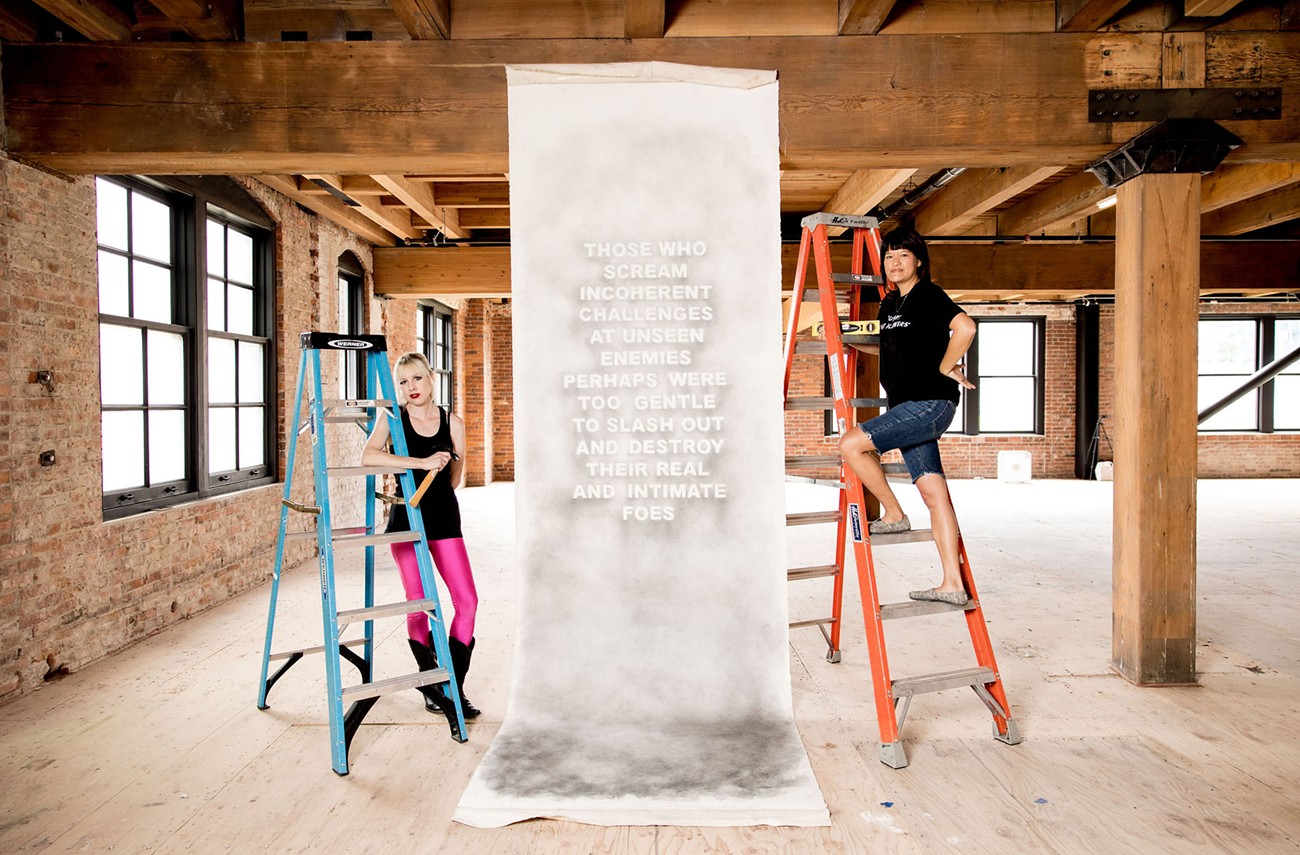 Amanda Manitach and Lele Barnett are pulling together a powerful exhibition at 419 Occidental. Brooke Fitts

Earlier this month, I stepped out of an elevator and onto the empty fifth floor of a Pioneer Square building with timber beams, brick walls, and beautiful light streaming in through massive windows.

Curators and artists Amanda Manitach and Lele Barnett led me around the enormous space, telling me about their vision for filling it: an enormous uterus you can climb into here; a repurposed pro-abortion American flag there. All these works would be part of their group survey show called Howl, featuring large-scale pieces by women and non-binary artists that largely address reproductive rights in the wake of the heinous Supreme Court overturning Roe v Wade.

“It was just a gut impulse,” Manitach told me, regarding their theme. The two had started planning the show right around the time of the Court decision’s leak to the press.

“That’s just what curators do,” added Barnett. “You have to pay attention to what people are thinking about… It seemed like an obvious choice.”

Howl is just one of several shows going on this weekend at RailSpur, a new “microdistrict” in Pioneer Square run by Denver-based real estate developers Urban Villages. Organized by the public arts non-profit Forest for the Trees (FFTT), more than 100 artists and curators are taking over eight floors and the alleyway of a recently renovated building called 419 Occidental–nearly 77,000 square feet of space! The temporary and (mostly) FREE art/block party runs from today, July 21 to Sunday, July 24. Taking place as an alternative to Seattle Art Fair (SAF) the same weekend, FFTT is a badass showing of some of the best artists working in the city today.

If you’re thinking that this concept sounds a lot like Out of Sight, you’re not wrong. From 2015-2017, the Greg Lundgren-led project also occupied a building in Pioneer Square during the same weekend as Seattle Art Fair, to show off the artistic brilliance of the PNW. Like Out of Sight–which many of these artists worked on or showed work in–this RailSpur art activation is just as much about showing off the wealth of artists Seattle has to offer.

The seeds for this multi-floor arts fest were sown about a year ago when FFTT president Gage Hamilton and RailSpur property manager Henry Watson got in touch about potential art activations at 419 Occidental. Originally, their discussions revolved around a residency on the ground floor–but about two months ago, Hamilton realized that Urban Villages was still searching for tenants as the building sat vacant, and he had an idea. “We wanted to fill the entire building with art,” Hamilton said in a recent phone interview.

So? He just straight up asked if he could do it–and Urban Villages was down for the project. The microdistrict had been redeveloped with an eye towards Pioneer Square’s artistic roots, anyway. Watson believed there was “no better way to embrace the grit and authenticity of the neighborhood than with an art exhibit that brings the community together,” as he wrote to me in an email. For no rental or usage fees, RailSpur handed the keys to Hamilton and his close collaborator Dominic Nieri of ARTXIV. They had just a few weeks to fill the tens of thousands of square feet of empty building space with art.

Rather than curate the humongous 419 Occidental all by themselves, Hamilton and Nieri decided to hand over each floor to a different set of curators–all mostly local to, or at least familiar with, the Pacific Northwest region–to do with as they please. “I wanted to give a variety of experiences and perspectives to make it seem like every floor is different,” said Hamilton. “We didn’t want anything to feel repetitive throughout the space.”

Thus, every floor will have its own, specific vibe. Some simply feature one singular vision, like on the sixth floor, where Oakland and San Francisco-based artist Christopher Martin is restaging floor-to-ceiling banners from his inaugural exhibition at the Institute of Contemporary Art San Francisco, entitled Ancient as Time. In the stairwell, Christopher Derek Bruno is installing "Its~Olafur-You+ME," an eight-floor light installation.

On the third floor, A Black Art Ecology of Portland’s Sharita Towne is bringing the work of conceptual artists maximiliano and rubén garcía marrufo. Gaspar Yanga–named after a freed enslaved African in Mexico who formed a marooned society in modern-day Veracuz–is a three-channel video maximiliano and marrufo have been working on for five years. The immersive work explores queer temporality, Black liberation, and the idea that time is constantly folding in on itself.

“[Yanga’s] story isn’t a story from 400 years ago, but it’s contemporary and maybe even in the future,” said maximiliano in a recent interview. “So much of Black liberation is based on being able to imagine a future. We have to dream it before we can start pursuing concrete things to make it a reality.”

Overwhelmingly–and kinda in the spirit of SAF–this weekend is all about group shows, with a specific focus on local artists. Well, except for Miami-based Axel Void’s mostly national and international 19-artist presentation on the fourth floor, 12,143, which represents the space’s actual square footage. The press release promises that it’s “avoiding any agenda other than the beauty and absurdity of this happening itself.” On the bottom floor, Hamilton’s FFTT gave 16 artists, including scene stalwarts Stevie Shao and Baso Fibonacci, a 7'x7' blank canvas and told them to go to town.

Then we have Manitach and Barnett’s sprawling Howl on the fifth floor. Having attended a lot of art fairs themselves, both have always preferred the satellites exhibitions “that feel a little more DIY and scrappy and less commercial,” said Barnett, over the crush of halogen-lit stadiums. Their hope with this 13-person exhibition that features a lot of already-shown work is to give visitors a bit more time and space with each object. “It’s an opportunity for contrast,” said Manitach.

Once you step out of the elevator, you’ll be greeted with one of Manitach’s ethereal,13-foot text-based drawings that uses a haunting quote from actress Frances Farmer. Close to the far windows is a partial restaging of Jite Agbro’s "P.L.U.A." that took over MadArt earlier this year. Attendees can also climb into an enormous red uterus–cleverly titled "Where are you from?"—made by Fumi Amano, in case you missed it at Method Gallery in September. Meanwhile, Amanda James Parker’s Félix González-Torres-inspired "Untitled (Portrait of Félix González-Torres)" fills an entire hallway with balloons that visitors can take with them over the course of the weekend.

XO Seattle has what is perhaps the most ambitious group show in the building; it will run for a month and cost $10 for entry. Designed and curated by Julianne Johnson and Austin Bellamy Hicks of SERIES 001, this "love letter" to the PNW's creative community features over 80 artists across two floors and 14,000 square feet of space. "We couldn't resist," laughed Johnson. "We made it the biggest show we could imagine."

Johnson and Hicks have brought together a mix of painting, sculpture, neon, murals, and sound baths. On a high wall above the space, Nikita Ares has installed four enormous, color-soaked paintings. Smack dab in the middle of the floor, Greg Kucera Gallery has lent one of Dan Webb's masterfully goopy wood carvings to bless the exhibition. Emily Counts assembled a sculptural garden of her whimsical ceramic works that catch the light of a nearby window.

Co-curators Moses Sun and Photon Factory's Erik Molano brought their own specific flavors to the show. Sun pulled together a Vivid Matter Collective pavilion, featuring the works of artists who painted the Black Lives Matter mural on Capitol Hill. Molano was in charge of immersive installations, curating a light and color therapy installation by Rosie Alyea called Double Rainbow. "It's the perfect opportunity to actually have a new canvas," Molano told me about XO Seattle's space.

With its multiple installations and clash of mediums, XO Seattle's overwhelming emphasis for this exhibition is having a good time. La Dive will be providing the booze in a month-long pop-up bar, Hrvst House will spin the tunes on their Friday night opening event, and the XO Seattle folks are pulling together the viiiiiiibe.

“A big part of the way we present art is that it’s a party,” said Hicks. “We’re trying to break away from the gallery and museum system and show that you can have something as sophisticated as a gallery or museum, but it can be just a bit more loose.”

Forest for the Trees' massive 418 Occidental takeover is happening from today through Sunday, July 24. It's all free—except XO Seattle, which will run for one month and cost $10 entry. Learn more about the entire endeavor here.