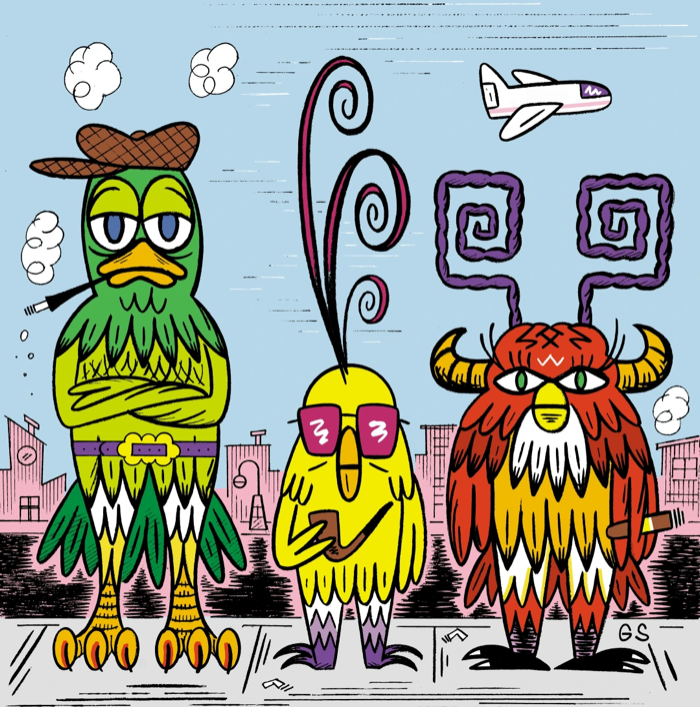 Greg Stump has been working as an artist, writer, and teacher in Seattle for two decades. He is a longtime contributor to The Stranger, a former critic and journalist for The Comics Journal, and the co-creator (along with David Lasky) of the acclaimed comic book series Urban Hipster.

In 2015, Fantagraphics Books published his debut graphic novel, Disillusioned Illusions, through its FU Press imprint. His most recent book is the cartoon collection Lovebunnies. Stump also teaches comics in the public schools through Seattle Arts & Lectures’ Writers in the Schools program, and to kids and teens at the Richard Hugo House.

Greg, you were part of a major comics renaissance in the 2000s. Fantagraphics and The Stranger were doing all we could to bring attention to the talent exploding out of Seattle. What kind of changes have you seen since then?

There’s a lot more acceptance of and interest in “literary comics” (for lack of a better term) and a less-narrow base of people making them. At the same time, higher living expenses in cartooning hubs like Seattle make it harder to get by while developing your art. I worry that there are fewer opportunities for the kind of casual collaborations—ones that don’t generate much money but help make an artistic culture feel vital–to happen. Maybe artists are now looking for sustenance from scattered supporters via Patreon and whatnot more than (or as much as) from local communities.

Likewise, the expansion of graphic novel sections in bookstores has been enormously helpful, but I do think something, maybe an energy or flexibility, has been lost by the decline of the lower-stakes 32-page “alternative” comic book format, which I really miss.

You’ve got a lot of range in your subject matter, some wacky ideas, and some deeply philosophical ideas, often in a simultaneous balance. Is that a conscious goal?

That’s a good assessment. It might just be that the artists and writers I found most inspiring in my late teens and early twenties were people like Donald Barthelme and Dan Clowes, who frequently took a similar approach. I can’t do it as well as they can, of course, but for better or worse their influence is just kind of baked into my M.O.

I really admire and enjoy stuff that indulges in aggressive absurdity while simultaneously using it for a larger purpose or critique—some of George Saunders’s stories or Paul Verhoeven’s movies are really good at doing that. In a paradoxical way, their surrealism strikes me as somehow more accurate in reflecting what it feels like to be alive than a lot of thoughtful, heartfelt, realistic stories.

Earlier this year you self-published a risograph book of cartoons—a couple of which we originally ran in The Stranger—called Lovebunnies. Can you tell me how it came to be?

I discovered a few mid-20th-century books by William Steig and Abner Dean that I liked and that used a different format—one single image per page, paired with a caption, and all on the same theme—than what I’d ever thought to pursue in my own work. The format really appealed to me, since it’s so much simpler than my own tedious comic-making process. It also creates a certain ambiguity or multiplicity of meaning that allowed me to explore a topic (relationships) for which, prior to that, I hadn’t found an entry point given my own sensibilities.

Yes, the ideas feel much more personal than your prior work. And it’s all risograph, right? I love that look.

Yeah, me too—I became especially enamored of the look of the stuff being put out by the great local publisher/printer Cold Cube Press, where I had the book printed up. The risograph angle was fun to employ because the book had to be printed in two colors, red and black, and risograph machines print those inks separately to achieve a pleasingly old-fashioned feel. That aesthetic also amplifies the theme for me: since the red is used exclusively for hearts, it’s as if love is this outside or alien substance that literally adds color to the characters’ lives.

Any significance to the flower drawing for this week’s digital cover?

I regret focusing exclusively on cartooning and never learning how to paint, but I’ve found working with watercolors to be something of a middle ground between the two, and that drawing flowers is just kind of addictive and meditative. For a long stretch of 2020 I would wake up and start each day by making a drawing of six to twelve flowers, just to kill time and do something productive since I wasn’t feeling the impulse to write at all. It’s a practice I highly recommend and only stopped doing because I wound up with such a big stack of drawings that it was almost embarrassing.

You can buy my comics, zines and books online at gregstump.bigcartel.com.

What comic artists are you excited about these days?

In terms of new releases, I was really impressed by local artist Alex Graham’s Dog Biscuits, a pandemic-set graphic novel that was originally serialized on Instagram. I don’t know of anyone else who had the nerve to address those themes with such precision in the exact same moment that they were taking place–it feels like a singular achievement.

My favorite graphic novelist of the past few years is probably Keilor Roberts (in particular the books Rat Time and Chlorine Gardens). I love how she alternates seamlessly between revealing matter-of-fact personal struggles and the funny, mundane textures of everyday life that usually go unrecorded.

Those are exciting recommendations, thank you. Anything fun coming up?

For several years I've been working on-and-off on a project that would collect some of my material teaching comics, step-by-step, to people who don’t consider themselves artists. The process of making the book isn’t especially fun, however; the fun part would be actually bringing the project to completion.

And to be able to reach way more people than those that are able to attend your classes, that sounds fantastic. Sign me up.

You’ll get the first copy if I can ever finish it!

Comments 0
Tags: Visual Art Picture Books
The Stranger depends on your continuing support to provide articles like this one. In return, we pledge our ongoing commitment to truthful, progressive journalism and serving our community. So if you’re able, please consider a small recurring contribution. Thank you—you are appreciated!
CONTRIBUTE NOW

Have You Ever Wanted to See 100+ Artists Take Over a Building?

Going Once, Going Twice—SOIL's Art Auction Is Back, Baby!

Capitol Hill's Newest Gallery Is in a Familiar Place

Finding Yourself Inside a Magma Slit