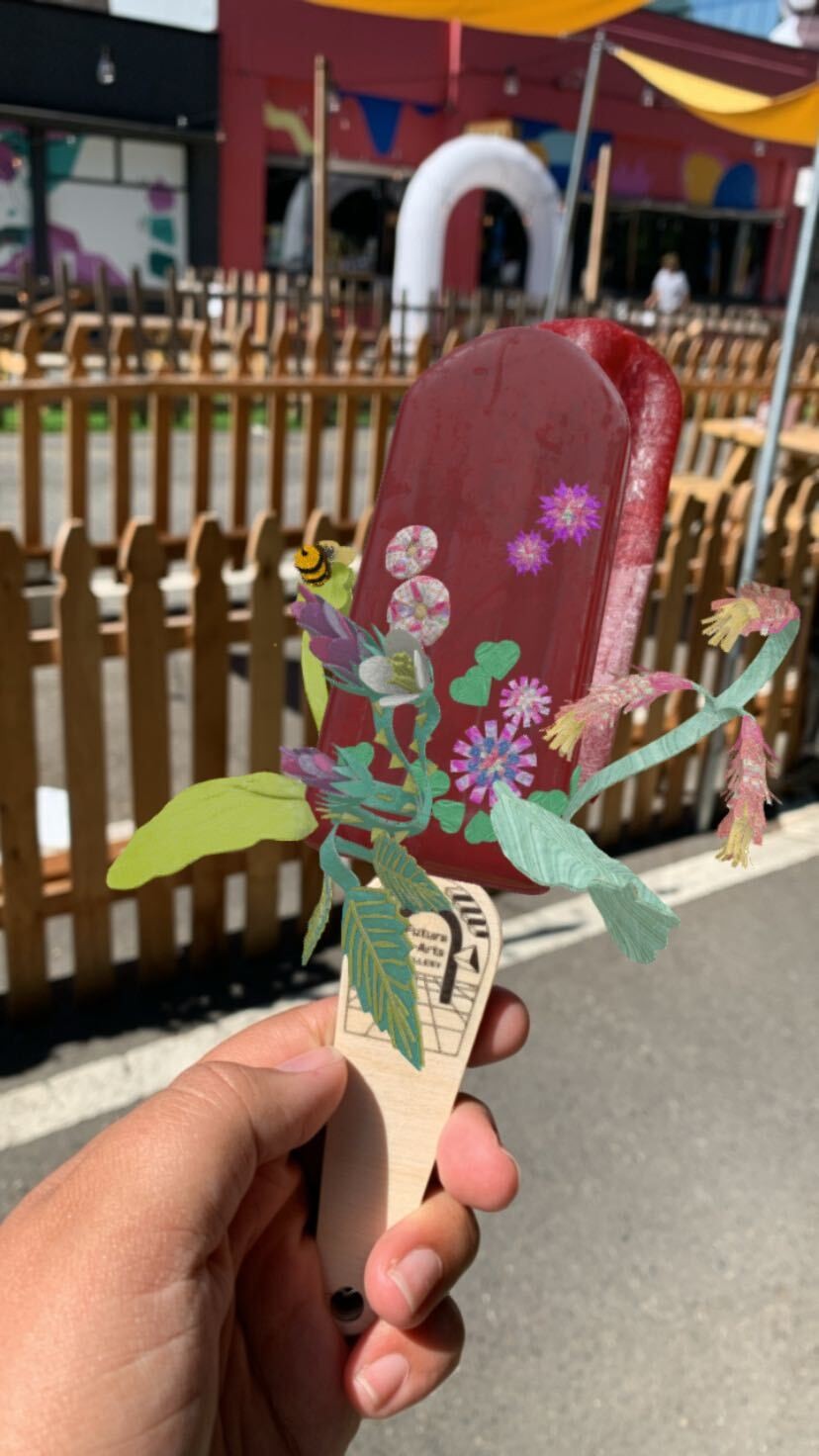 Keep the popsicle stick so you can show this off to your friends later. It will also change with every season. JK

If you close your eyes and imagine how summer tastes, what comes to mind? Tomatoes, zucchini, corn? For Seattle artist Nina Vichayapai, summer tastes like Himalayan blackberries and smells like lemon balm, mullein, tansy, and amaranth. These weeds and berries are embodied in her augmented reality (AR) piece Home Here, a virtual sculptural fabric garden of Pacific Northwest plant species that bloom this time of year. Made in collaboration with Houdini Interactive, it even adds another layer of depth with sounds of wind chimes and buzzing bees composed by Eli Hetrick.

Home Here isn’t a painting and it’s not exactly edible art, but it’s more than just a sculpture. It’s AR+Pop (pronounced like the misunderstood Lady Gaga record), in the form of a custom popsicle stick designed by Lamp Lab, laser-etched with a special QR code. The code leads to an AR filter on Instagram that brings the popsicle to life. And there’s physically a popsicle, too. Vichayapai collaborated with Black-owned Seattle ice pop supplier Ma & Pops to create a not-too-sweet lemon balm and (invasive) Himalayan blackberry popsicle for viewers to suck down while they take in the work.

Vichayapai’s piece is part of AUGMENT Seattle, an outdoor showcase of local and global artists put on by Future Arts, a women- and nonbinary-led nonprofit organization bridging arts and technology, in collaboration with Meta (f.k.a. Facebook) Arts. And AR+Pop is a seasonal Future Arts program coordinated by org co-founder Laara Garcia. The year’s theme, The New Nature, brings together work that “rewilds” the city environment with fish, indigenous and non-native plants, and ideas of what the future could look like.

The showcase is a mixed-reality experience where “[u]rban landscapes will bend and shift reality, welcoming the community to experience meaningful interactions through digital storytelling.” The art for AUGMENT isn’t behind glass or nailed onto a gallery wall. Instead, elements of showcase’s the nine pieces are powered by Spark, an augmented-reality technology, and Instagram (a Meta property). To unleash these works, you have to use a QR code that opens a filter on IG, adding a visual layer to the building, mural, or popsicle stick in front of you.

Now entering its final weekend, AUGMENT takes place along the 9th and Thomas block right in the heart of South Lake Union. According to Future Arts founder and creative director Yuliya Bruk, holding this exhibition in the tech-dense neighborhood was intentional.

“There’s a lot of discussions around tech and arts and how they’re very disjointed in Seattle,” said Bruk over the phone. “Future Arts is trying to tackle a lot of these issues and talk about them, discuss them, and put art literally on that land.”

This intersection of the arts and technology communities has been on Seattle’s collective mind of late. A month ago, there was some social media-fueled brouhaha brought on by Museum of Museums’ ultimately canceled Amazon vs Microsoft exhibition. Founder Greg Lundgren wanted to put on the show as a way to “hold deeper conversations around the impact and future roles of technology companies in our region,” he told Crosscut. But many argued it was an offensive proposition from the jump.

AUGMENT, however, brings these threads together in a nuanced, inclusive way. Rather than make the showcase a battle between the two, it demonstrates a path for arts and tech to work together. Take Michelle Kumata’s Emerging Radiance, which combines painting, AR, and audio to share the untold stories of Japanese American farmers who lived in Bellevue from 1920-1942 before being violently incarcerated during World War II.

Collaborating with filmmaker and AR artist Tani Ikeda, the ancestors depicted in each painting come alive and began to speak about their personal histories as water flows and cranes fly above them. Originally developed for the Meta offices, the tech is about “telling stories in a different way,” Kumata—who is still new to AR—told Gayle Clemans at the Seattle Times.

Emerging Radiance is beautifully moving, seemingly bringing these ancestors into the gallery to connect viewers with an animated vision of the past. Further collaboration between giant tech companies and local artists certainly won’t solve the housing crisis, but it is interesting to see the way that the art and tech communities can at least connect and experiment with one another—and line the pockets of artists while they’re at it.

Back to Vichayapai’s Home Here AR+Pop. What’s delightful about the piece is that even though the garden of PNW plants is virtual, it still grounds me in reality. Vichayapai’s personal rendition of Seattle’s summer made me think about the foliage and smells and textures I associate with the season. While slurping down my popsicle, I thought about the feel of scratchy brown grass, the fleshy sweetness of Yakima cherries, the smell of briny Puget Sound washing up to Capitol Hill on a hot summer day: all natural elements that represent home.

AUGMENT Seattle runs through August 28. It’s free with a 24-hour public display, but certain pieces have special exhibit hours which you can check on their website.