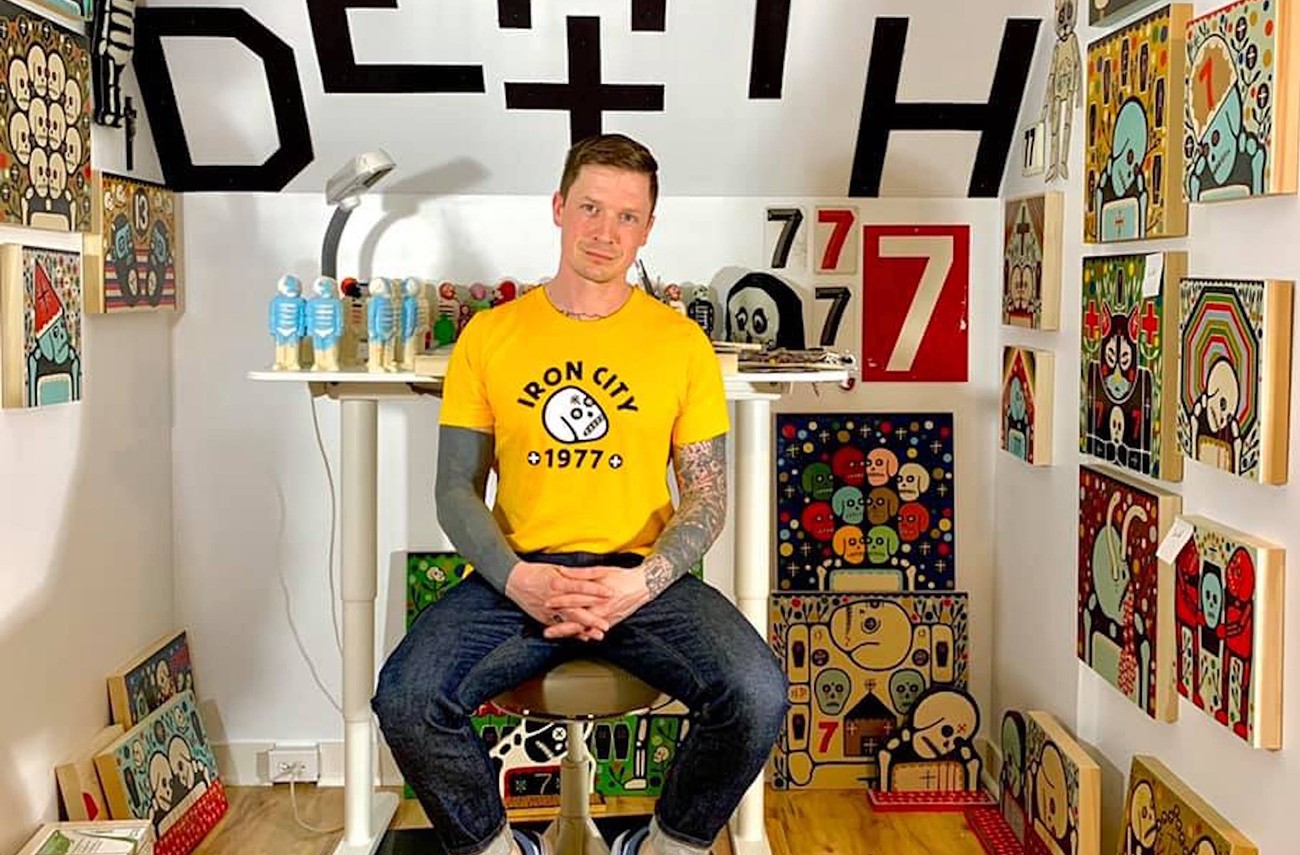 Living in the cycle of life and death. Courtesy of the artist

Mike Egan’s creative career began as a kid in Pittsburgh, where cartoons, skateboards, and album covers piqued his interest and started to shape his aesthetic. After studying printmaking at Edinboro University, he took some interesting detours that informed his subject matter, eventually leading him to a distinct style of painting that blends styles of folk art from around the world to express some heavy themes like heartbreak and the inevitability of death. He’s been showing at galleries around the US, as well as Canada, Australia, and the UK.

In our interview, we talk about how unfortunate and difficult events can have surprisingly positive repercussions.

You spent years in the death care industry—how did being a funeral director and embalmer affect your perception of death, and lead to its creative influence on your work?

Yeah, all together for about five years, from mortuary school in Pittsburgh to being a full-time embalmer in Reading, PA. I think that being around death and grieving people all time really stressed me out. I was constantly thinking about my own death and what I really wanted to do with my life. So I guess that really pushed me to be an artist which is what I always wanted to be. As far as how it influenced my work, I was taking in all of the visual aspects of funeral homes and the churches that we’d be in for services. I’d sit in the back of the church staring at stained glass windows and all of the religious statues and icons which are all in my work today.

And you had a short run in the air travel industry as well, can you tell me about that?

So after college, where I studied fine art, I moved back to the Pittsburgh area. I grew up near the airport and ultimately got a part-time job with the airlines. My job was to clean the planes when they came into the gates and help push the planes back when flights were leaving. I did that for about six months and eventually got a full-time bid to go work in one of the hangars. Over there they would do major cleans and inspections on the planes. Well, the first day of work was really an orientation, going over what to expect and watching safety videos. We took our first break around 9 am and when we returned the instructor had the televisions on. That day turned out to be September 11, 2001. So my career in the airline business was very short-lived. This is what led me to go to mortuary school because I wanted a job with some sort of security.

One of the many things I find interesting about your work is that while your creativity feels centered on death, there’s an active juxtaposition of living elements, namely sprouting vines. Can you talk about including these visual metaphors of life and perseverance?

Yeah, for sure. I think when I started painting, the vines really were a space filler for composition purposes. I didn’t put much thought into it. But as time went on I thought a lot about what I was trying to say in my work. We can’t have death without life, so the vines represent that the main figure is more than just a representation of death. They lived, changed, and grew. They also show that when someone dies their spirit lives on through stories and the work they did. We are all living in the cycle of life and death and the two will always go hand and hand.

Can you talk to me about some of your influences and inspirations? I see some José Guadalupe Posada and some Käthe Kollwitz touchpoints, what else gets you going?

Yeah, Posada and Kollwitz were two big artists shown to me in college by my printmaking professor. I loved the bold line work and themes of death in their work as well. I grew up Catholic so religious art and icons have always been something that I love and will collect. I use crosses and sacred hearts in my work quite a bit. I love old vintage Halloween costumes, photos and overall anything with black cats, witches and jack-o-lanterns. Folk art and outsider art from all over is another thing that I love to look at for inspiration. Russian, Polish, Mexican, and American folk art from the south are all amazing. I love the storytelling and how simple the work can be. Music is also a big one, I’m always listening to music when I work. I can hear groups of words together in a song and will write them down and those can turn into titles for paintings or I figure out how to to visually interpret them into pictures.

Your upcoming show at Roq La Rue is exciting as hell. What other cool projects are on the horizon?

Thanks so much! I have upcoming shows in Santa Fe, Chicago, and New Orleans to round out 2022 in the gallery world. I’m also excited to be working with a new toy company called Heavy Cream, who will be releasing a new vinyl toy of my skeleton character Bones. Other than that I’m working on plans to have my own brand called 77 for 2023, it’ll consist of clothing, collectibles, home goods, etc. Lots of good stuff!!