And, Yes, You Can Sit on the Stones 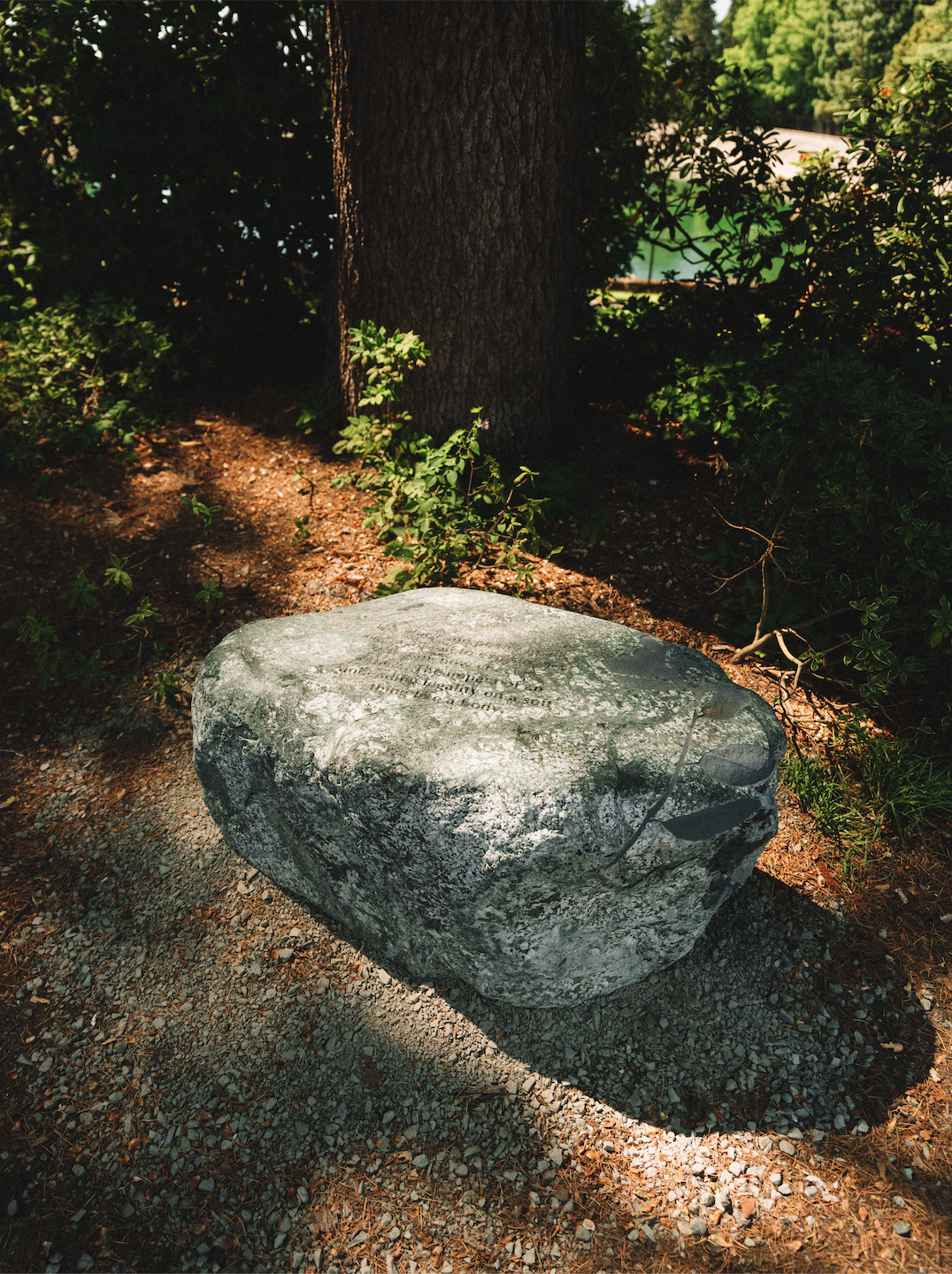 Is this how Moses felt? Jon Pendleton

Finding relief in the shade from the midday sun, I stood in the crunchy grass of Volunteer Park and read the text engraved on the irregularly-shaped stone bench before me: There’s no way to crystallize a glossary of all we have lost, but if there were, I’d offer it to you.

Of course, reading “all we have lost” my mind instantly went to COVID-19 and how we’re only just beginning to process the incalculable toll of the pandemic. Never have I been left emotionally bereft by a bench.

The solemn line reflected the thoughtful placement of the bench itself—on the south end of the park, just off the main path in a grove of bushes facing the mansions lining Prospect Street. This particular bench is one of fourteen stone benches sprinkled across Volunteer Park. Collectively, they form Soft Services, a site-specific work by New York-based artist Chloë Bass commissioned by the Henry Art Gallery. Soft Services will remain in Volunteer Park for one year and on Saturday, October 1, Bass will be at the park for a conversation with local author Mattilda Bernstein Sycamore.

Working with Seattle Parks and Recreation and Volunteer Park Trust, Bass’s project is an exploration of systems of care in this country—the distinction between the natural and unnatural, the public and private—as well as memorials to what we’ve lost. The power of Soft Services, which is a reference to Ryan White/CARE Act funding that went towards “soft services” like massages and meal trains, lies in the possibilities of sustained interaction from the public and how the work can be a potential map towards healing from the past several years.

Though none of the benches adhere to a set look, each has at least the same three elements: a line of text, a plant silhouette, and being made from locally-sourced stone. Bass worked closely with Marenakos Rock Center in Issaquah for each sculpture, choosing stones with their own distinct look and height. And, yes, you can absolutely sit on them. Some are good for resting, and you might find your bum slipping off others. The benches' placement in the park isn’t necessarily meant to break up the natural flow of visitors, rather, they're nestled into built-in features like the lily ponds and popular places for people to stretch out or have picnics.

In constructing the show, Bass received access to Volunteer Park Trust’s resources to get a sense of the park’s history and meaning. Bodies, rest, and memorials figure deeply into Volunteer’s identity—its initial service as a cemetery in the 19th century, its hosting of early Pride parades, its controversial status as a remembrance to Spanish American War vets, and its less-documented but just as well-known use as a local cruising spot. And, of course, during the early days of the pandemic, it functioned as a vital place for friends and family to gather at a distance.

Considering all that history, along with interviews with local HIV/AIDS activists, the lines from each of the stones address care—the systemic lack of it, who gets access to it, and what true comfort could look like. The cultivation and display of abundance, reads one. Yearning for the relief of a system we turn towards again for comfort, forgetting those who never did, or could, reads another. These lines are written in Optima font, the same font used by Maya Lin for her Vietnam Veterans Memorial in Washington, DC, which adds another layer of reference to the piece. Not meant to be read in any particular order, the lines form a sort of automatic poem, wisps of a conversation you can enter at any moment.

The botanical silhouettes of three plant species—black locust, alder, and western juniper—rendered in reflective street paint also tell a story about Volunteer Park, both in the past and in the future. Park architects the Olmstead Brothers planted black locust upon its opening. Alder, on the other hand, is indigenous to the Seattle area and is often used to treat inflammation. Western juniper has yet to make an appearance in Washington State, but climate change specialists theorize it will migrate up to the Pacific Northwest from California to escape the warming climate.

While not strictly only dealing in public artworks, Bass's most well-known pieces are ones that lurk in public spaces, asking passersby to question and reflect on their own being in that space. Her two-part Wayfinding series, done in conjunction with Studio Museum in Harlem, placed giant, reflective billboard-like signs throughout St. Nicholas Park in New York, all of which ruminated on care and attention.

Bass's installation in Volunteer Park is no different, forcing viewers to pause in their own circumambulation of the park and ponder its history, but Soft Services is much more subtle. Rather than the pronouncement of a sign, you must approach the benches to read and consider them. And though the installation holds a lot of ideas—care, HIV/AIDS activism in the city, climate change, the COVID-19 pandemic, and the history of Volunteer Park—it fits this contemplative nearing-the-end-of-the-pandemic moment, when there's so much we're all holding onto. At the very least, we'll need a place to sit and reflect.

Chloë Bass's Soft Services is installed throughout Volunteer Park (with two benches outside the Henry Art Gallery) until August 23. She'll be ~in conversation~ with author Mattilda Bernstein Sycamore this Saturday, October 1 from 3-4 pm. The event is free, but you should register in advance.