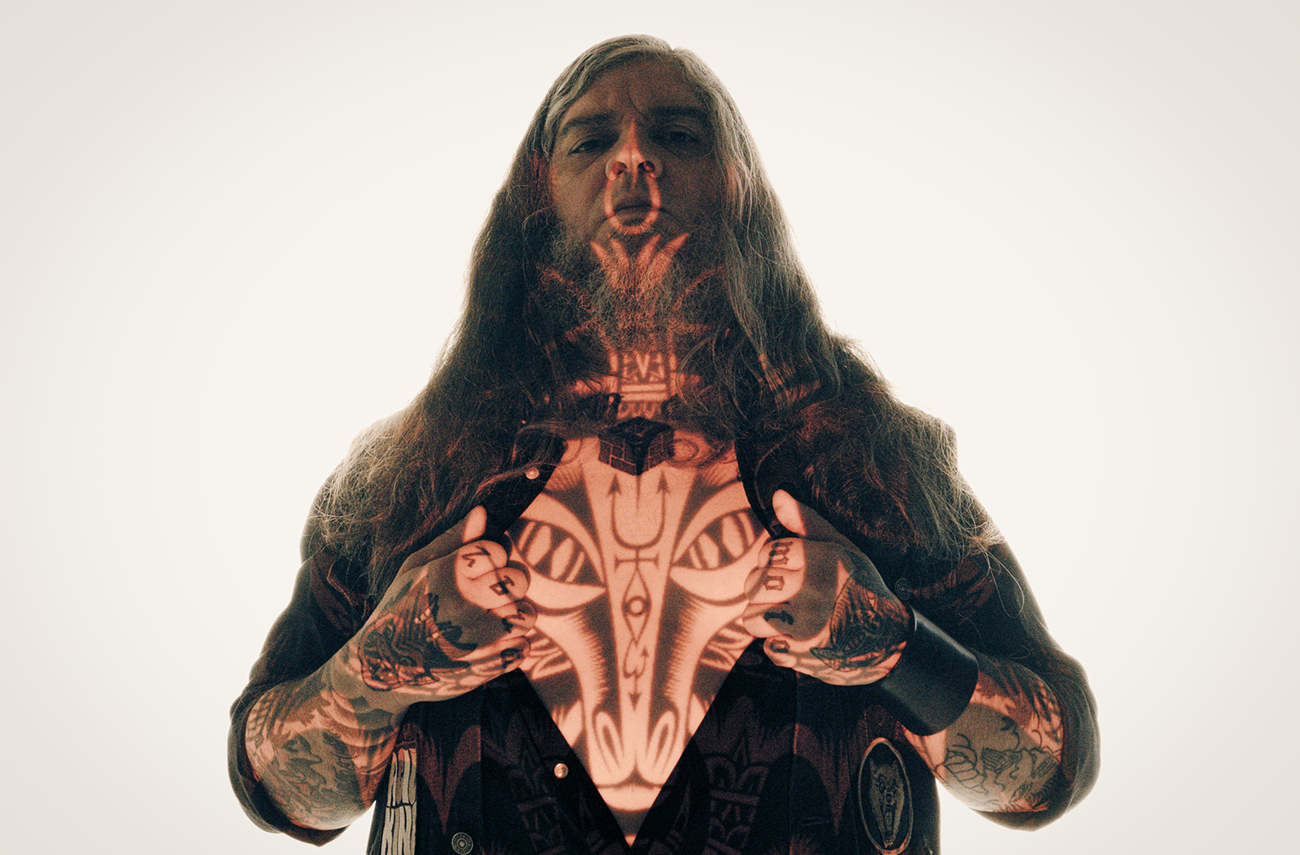 Martin Ontiveros’s “Pop Occultism” explores heavy metal imagery, ancient Mesoamerican/Mesopotamian themes, and a slew of imaginative subjects ranging from spooky to surreal. With hardly any formal training, he’s developed a very iconic, diabolical style and built a successful career ranging from the gallery world to album covers, commercial graphics, and even toys and figurines. After 25 years in Portland, OR, he now lives in Oakland with an orange tabby cat Zeus, his wife Nancy, and her orange tabby Ronny Sunshine. In our interview we discuss creative stimulation, emotional obstacles, and the power of not being able to hit “undo.”

Just like you, my creative career began through punk, hardcore, and metal, and I’m so grateful to have grown up in a scene that fostered individuality and a real sense of capability. Can you tell me about a time when you realized, "Oh, hey, I can be an artist if I want to?"

I can’t cite one particular instance, but it was when I was around age 15 or 16, and I was really starting to notice the names of just who was making all the art I was into—in comics, on record covers, underground zines, etc. I thought it would be super badass to be the artist on that show flyer, or the band tee shirt everyone wore, on a record cover, whatever I could get. I felt the power of those visuals and I wanted to make them too.

You mentioned listening to heavy music when conceptualizing and sketching, but switching to podcasts for the actual labor of your technical phases, which I found interesting. Is it that you want that part of your brain to be occupied or is it just about productivity?

A bit of both actually. Music helps the productivity in that it’s stimulating the vague ideas and elements into imagery. Like little movies that I’ll grab screenshots of and sketch out. Podcasts because it occupies my mind while the concentrative work is happening and adds a little levity to otherwise silent, serious time. I don’t like too much quiet when I work, it kind of disturbs me.

What’s a good starter podcast for anyone interested in the supernatural, occult, or hidden histories?

Shockingly enough, I don’t listen to a whole lot of those kinds of podcasts. Or I should say, I haven’t sought them out much, and now that you mention it, I should. It’s mostly comedy and current events, historical stuff, and film for me. And the occasional audiobook. So on that topic, I wouldn’t be the one to ask. But I’ve listened to Euphomet recently and I like it. Stuff They Don’t Want You to Know is a bit mainstream but it’s fun. Noble Blood.

Can you tell me about how ADD and depression have either helped or hindered you on your creative path?

Both! ADD means constant daydreaming and ideas—and an upside of it is when it’s time to focus on an art project, it can be razor-sharp. But it’s also wreaked havoc in my life and can make me a distracted, disorganized mess. And a procrastinator, oh man. Depression drives me to get away from outside influences and find a solitary space to make stuff in—but can also be a crushing weight to drag around. They’re my dark passengers on this creative path. I didn’t ask for them, but they’re here and I have to work with them or around them.

I loved realizing that your work—though flat and ideal for vector assembly—is all done in the gloriously old-school method of pencil, ink, paint, paper, canvas. Are there times when you’re tempted towards having an “undo” button?

Sure, but I can’t do it. I don’t WANT to do it. I totally understand that vectors are just another art medium and know a bunch of people who are terrific at it and that’s awesome. But for me, it just feels like a disconnect between mind and materials that I can’t get past. I have to feel that pencil or pen digging into paper, have to have the pressure of getting the brush stroke right on the first pass if I can. I do have an iPad and use Procreate to sketch, and it’s fun, but no substitute for what I already know how to do with my hands.

In a 2018 interview you mentioned wanting to make more time for papier-mché sculpture, can you tell me more about working in 3D?

I still wish I had more time for it. I recently took on an outside studio spot specifically to work on some papier-mché stuff I’ve had sitting around. I love it because I’m forced to shape something with wads of paper and wire and tape rather than just draw it, and it can decide to change itself as I go and I have to follow its lead, not mine. I like that it can turn out a bit crude and that I’m OK with it as is. I’m a bit of a perfectionist and it’s an imperfect medium. I like that it’s something that is still a bit new territory to me so it’s exciting, labor-intensive, and fun. And the viewer reaction you get to it is very different to something you make in 2D.

It’s exciting to explore a medium that you have less control over. I suppose it brings back the thrill of the struggle. Like skateboarding switch-stance, or increasing the difficulty level of a video game.

Yeah pretty much. Though I keep my video games set at “normal,” ha ha.

What are you listening to these days?

YOB, Electric Wizard, Opeth. Been listening to old Steel Pole Bath Tub too, it still holds up great. I’ve gotten into weird synth stuff like Magic Sword, Dream Division, the Night Monitor, the weird giallo/witchy style rock that Library of the Occult has been releasing for a couple years. A bunch of dungeon synth. I’m on a mission for atmosphere and mood!

Mortiis is one of the OGs! But in that vein, yes. It’s a new genre for me, I’m digging where it takes me.

And what’s on the horizon?

Fresh Blood, a group show at Mortal Machine Gallery in New Orleans, Tiny Ghosts group show at Roq La Rue, a mini solo show in the Grass Hut Art Market event at Floating World Comics in Portland. I also illustrated a book of spooky poetry for kids called Monsters Growling in the Background that was just published by Reycraft Books. And some other stuff coming that I can’t mention because NDAs.

Sounds fantastic, excited to see all this new work. And I guess I’ll see you at Roq La Rue next Friday.

I will be there.