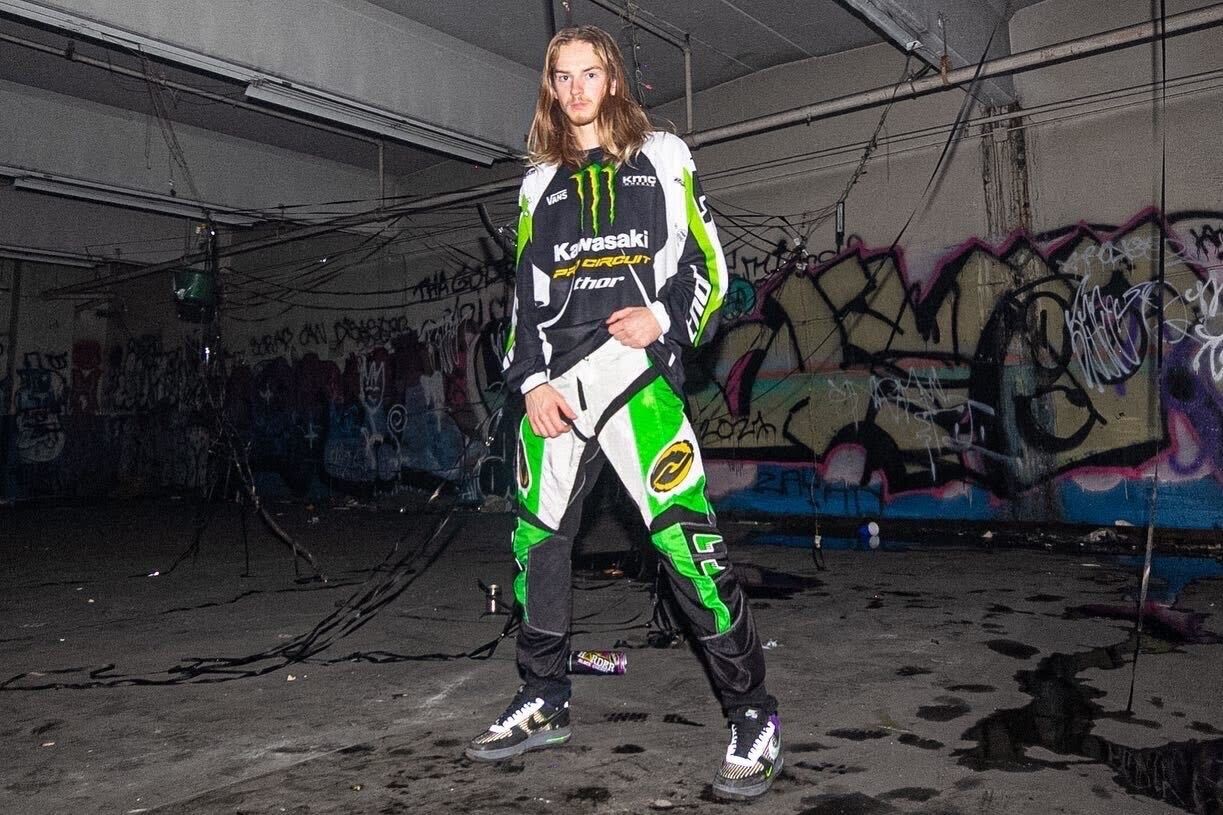 Twenty-year-old photographer Luke Misclevitz was born and raised in Portland, OR, where he was brought into the punk scene at a very young age. He discovered photography at age 14 and for the past four years, he’s been documenting Portland’s underground music, fashion, and nightlife scenes with style and fortitude. In our interview, we talk about the power of documentation, the ephemerality of digital art, and the practical struggles of throwing illegal underage shows.

One of the many things I love about your work is that it confirms that the kind of wild, wonderful all-ages underground scene that I grew up with (in the ’90s) is very much alive in Portland today. How would you describe the scene, and what have you gained from it?

The Portland music scene is loud, in your face, sweaty, and fun. Most importantly, it’s a community. Like-minded people looking out for each other and doing things by our own means. We also care a lot about safety. While it may seem like reckless noise-making and slam dancing, the organizers of these shows care more about safety than most legit venues. It’s very common to have people trained in first aid, CPR, and emergency response at shows. Usually, there’s free water provided. We work with organizations like No More Dead Friends, which spreads awareness about drug overdoses, and come to shows with supplies to deal with overdoses in the unlikely event they happen. We care a lot about each other in this community and safety is always the highest priority, I think a lot of people don’t see that from the outside.

At 16 you tested out of high school and began taking classes at Portland Community College. Can you tell me about that choice and how it has affected your creative path?

My whole life I have always had a deep love for education but a strong dislike for traditional school systems. I had pretty good grades when I cared about what I was learning. The real challenge was the lack of autonomy. I never understood why I had to spend eight hours sitting down reading a textbook to learn things that didn’t align with my path when I could learn so much more from doing things in the real world. When I started really developing my photography passion in 10th grade, I began to realize I could be doing way more creatively if I wasn’t spending most of my time in the classroom. So I decided to test out of high school and take classes at Portland Community College. I got accepted into a scholarship program that gave me some free schooling with a plan to transfer to Portland State University. From that point on, I spent my days doing photo work for other artists and did all my classes at night. I’m not sure if I would have progressed nearly as much if I had stayed in high school. In addition to the extra work time, it also put me in circles with much more established artists and adults. Surrounding myself with older people forced me to act more mature and take my work more seriously, which I preferred to being in circles with other teenagers who didn’t take what they were doing very seriously.

Can you tell me all about your self-published photo book LOUDER and how it came to be?

I think a huge part was fear of the impermanence of digital artwork. I had been building lots of connections in the fashion and music world, and when Facebook and Instagram shut down [one day in October 2020] I lost all my connections. It made me realize how temporary social media can be and how dangerous it is to have everything on there. While Instagram and TikTok are the backbones of digital art right now, I think it’s only a matter of time before they sit beside Myspace and Tumblr. The other reason was a hard drive failure in 2020. I learned the hard way that backup drives aren’t only important, they’re necessary. I lost over 50,000 photos taken between 2016-2020. So with that fear, and a new hard drive, I set out to take as many photos as possible, with the intention of making a book. I think I was the first person in this generation of the PDX punk scene to make anything like this. There’s been small-batch zines and lots of photos taken but no photo books. In 20 years most of these shows won’t be remembered often, who knows if Instagram will still exist, but this book exists. It says “Hey! We were here, this is what we did, this is who we were.” Sort of like a much smaller and more niche version of the golden records on the Voyager space probes.

Totally, so many great bodies of work feel just like that, a time capsule of sorts. Nan Golden comes to mind, as well as Eugène Atget. I love that this book captures a time that would otherwise be forgotten, or worse, never even known about!

I love Nan Golden! I own a copy of The Ballad of Sexual Dependency. My biggest photographic influence is Ryan McGinley. The Kids Were Alright blew my mind when I was 16. That raw, shocking, and in-your-face feel has always been something I strive for.

You co-founded and run Illustrious Youth, which you’re calling “Portland’s first-ever fashion show rave.” Sounds like fun, can you describe the events you’re producing and what’s on the horizon for this project?

We focus on highlighting underground fashion and music artists and merging the two together. It all started as a school project I did with my classmate Keyanna Kahey (Keek$) who I met at a house show back in 2019. We’re both passionate about fashion, music, and shows. After attending and modeling in a few underground fashion shows, we came together and decided to direct and produce our own shows, but with a twist. We wanted our shows to be just as much live music as they were live fashion, and every show has new and different artists, designers, and models. For the first show, 1,200 people came. It was a night full of innovative fashion (both from the designers and attendees) and loud music, and the show went until 5 am. It’s a lot of work and money for two people to produce and design massive shows like this. As edgy and cool as abandoned warehouse shows are, we want to have established venues, we want security, we want better conditions for our models and designers, and we want to be taken seriously. I think the best way to do this in the immediate future is to do sponsored shows with brands like Doc Martens, Vans, or Demonia. I’d also really like to do a show in the Nike SB Warehouse skatepark but that one will take some convincing. Once we have the resources, we plan on taking Illustrious Youth on tour. First the west coast, then the country, and then Europe.

That sounds like a great plan. When I was a kid we used to book hardcore shows in the most random places, the longest lasting happened to be a tiny church in a shitty strip mall and I saw some of my favorite, most formative shows there.

Everyone in our scene really wants access to established venues that allow all-ages shows. We don’t like doing our shows in basements, abandoned buildings, or outdoors. It’s something we have to do because there are no venues that are accessible to us that allow all-ages shows. Most venues rely on alcohol sales to make money, but our demographic is mostly 16-20 years old. Any venues that do allow all-ages shows are so expensive that the bands wouldn’t make any money. We have a ton of creative and talented people who are driven to create art and run these events, but with no venue, we’re stuck doing these shows illegally. We want security at shows, we want walls, we want bathrooms, we want safety. None of the spots we use last longer than six months because they either get shut down, torn down, or the owners get kicked out. It’s an exhausting cycle to be a part of if you’re the one running the shows. There’s been a lot of talk about leasing or buying an event space for our community but for that, you need business expertise, mentorship, licenses, and most importantly, money. I just want people to see how much is going on in our scene and help us take things to a higher level.

What are you listening to these days?

I listen to a lot of different music across many genres, but listening to my friends’ music is a constant. Some of my favorite local punk/rock bands from Portland are Rhododendron, Kill Michael, Common Girl, Growing Pains, Chainsaw Girl, Sea Moss, Twister, Dr/unk, Candy Picnic, Purity, and Alien Boy. My favorite local electronic musicians are Heartdrive, Hi Drew, Ivy Kashmir, Soops, God Boat, and Amulets. As far as my personal music taste outside of the local scene, I’ve been listening to a lot of Aphex Twin, Bladee, Black Kray, Frank Ocean, Machine Girl, Turnstile, MIMIDEATH, and Air. That’s a pretty weird mix of genres now that I say it out loud, but I never liked sticking to one genre or style.

That is quite a range, I will continue scanning Bandcamp for these Portland bands. Thanks for sharing and keep up the great work!

Thank you so much for the opportunity to speak on some of the facets of this wonderful community. I’ll be doing a lot more in the future so I’m excited to see where all of this goes.

Purchase photo prints and an exclusive printing of LOUDER at talkloudericanthearyou.bigcartel.com.