Wokeface Wants You to Be Happy 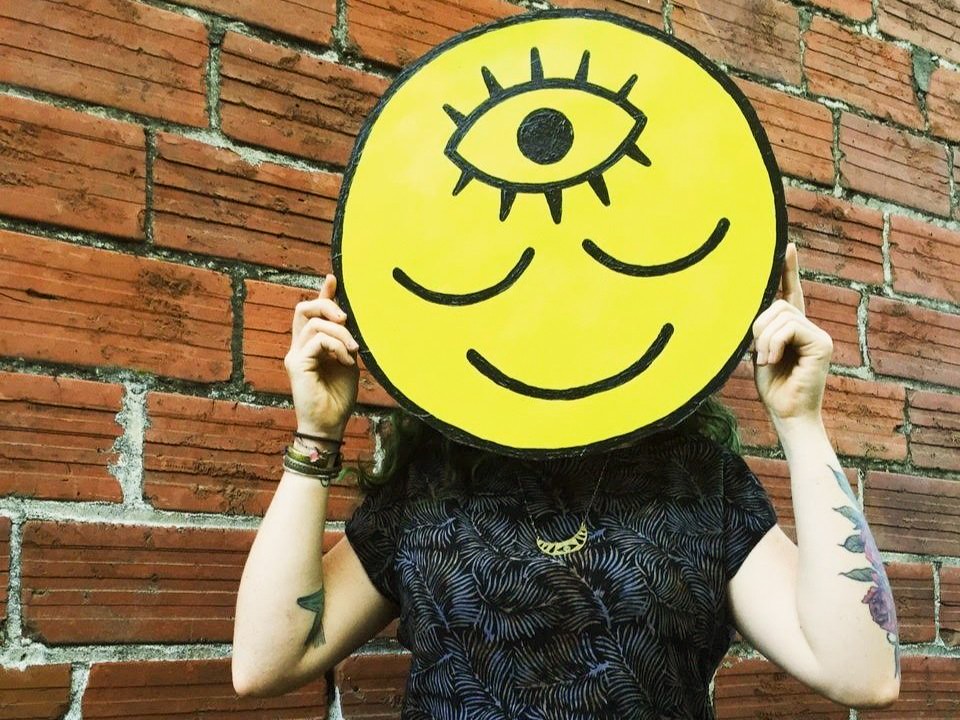 Wokeface holding their signature design. Courtesy of The Artist

Wokeface is the project of an anonymous artist living in Portland whose goal is “to facilitate self-love and a sense of connectedness to fuel a more compassionate and harmonious existence.” The ‘enlightened eye’ prevalent in their work has become something of an urban hieroglyph in Portland. You can see their artwork on stickers, wheatpastes, murals, and wood installations sprinkled all over the Pacific Northwest and beyond. In our interview, we discuss Portland’s street art scene, the introvert spirit, and turning a hobby into a full-time hustle.

Can you tell me how Wokeface was conceptualized and brought into the world?

Portland has a lot of great street art! A random day in April 2016, it occurred to me that nobody got permission to do it, they just did it. And I could, too. I worked with materials I had on hand—paint and scrap wood—to create the first cutout installations, which I screwed into telephone poles. I chose the symbol now known as “Wokeface” from my sketchbook because I wanted whatever imagery I put into the world to feel positive and peaceful. Putting up the first piece was exhilarating and suddenly made me feel connected to my city and a new community, and immediately I wanted to keep doing it.

We’re glad you did! You’re from Collierville, TN, what brought you to the PNW?

Collierville, a suburb of Memphis, is my hometown. I moved to St. Louis, MO for college, then after several years was established as a freelance designer working from home. I realized I could do that from anywhere, and made a list of what I wanted in a city. Portland checked almost all the boxes and in 2009 I made the move cross-country. It was one of the best decisions I’ve ever made. I feel way more at home in the PNW and the abundant natural beauty never gets old!

Street art tends to fall somewhere between satire and outrage, with a healthy sprinkling of trying-to-be-cool, but you disrupt that by sharing something so cheerful and earnest. What was your general reception by the city and the street art scene in Portland?

Portland is special compared to many other cities with regard to street art. At worst there’s a high tolerance for it. There’s a very active scene of people making it and appreciating it. My initial reception felt really positive. Other street artists welcomed me, gifted me their art, invited me to meetups. Honestly, it was one of the most welcoming scenes I’ve ever joined, which is a huge part of why I stuck with it. Most of us are introverts and a little weird, and I think we share a special kindred spirit within by feeling drawn to this kind of art.

The biggest lesson I learned early on was to not become attached to street art. It’s ephemeral. It’s going to get swiped or tagged or covered up, and that’s okay. Don’t take it personally. Now, this is something I treasure about it, it’s an ever-changing landscape of art.

It’s so cool that you opened a brick-and-mortar storefront. Can you tell me how the shop came into existence?

Thank you! It’s been a wild journey. I never set out to do retail or even make a business out of Wokeface. But not long after I began making and sharing it online, folks started asking if they could buy it. So I started out really small, selling stickers and woodcuts online and doing local pop-up events. Then a few local shops started selling my items. Over the years this side project grew into a full-time passion. I kept busy selling online and running the business out of my art studio. Early in the pandemic I outgrew my art studio and was looking for something larger. I found this space, which also had a storefront, so I decided to give it a try! Higher Self is the storefront—it sells my merch as well as 50-plus other indie and local artists. It’s been cool to step on the other side of it and work with other artists just starting out.

Next major goal for your art?

I would love to do bigger collaborations with other indie brands. I want to see my patterned art on apparel, textiles, housewares, anything. And I’m always interested in doing more large-scale mural work.

For questions about custom commissions, you can reach Wokeface at hello@wokeface.com and you can visit their shop Higher Self at 6315 SE Holgate Blvd, Portland, OR 97206.

Comments 1
Tags: Visual Art
The Stranger depends on your continuing support to provide articles like this one. In return, we pledge our ongoing commitment to truthful, progressive journalism and serving our community. So if you’re able, please consider a small recurring contribution. Thank you—you are appreciated!
CONTRIBUTE NOW

Capitol Hill's Newest Gallery Is in a Familiar Place

Finding Yourself Inside a Magma Slit

Craft Festival Offers Candles, Sauces, and Whatever a Tincture Is