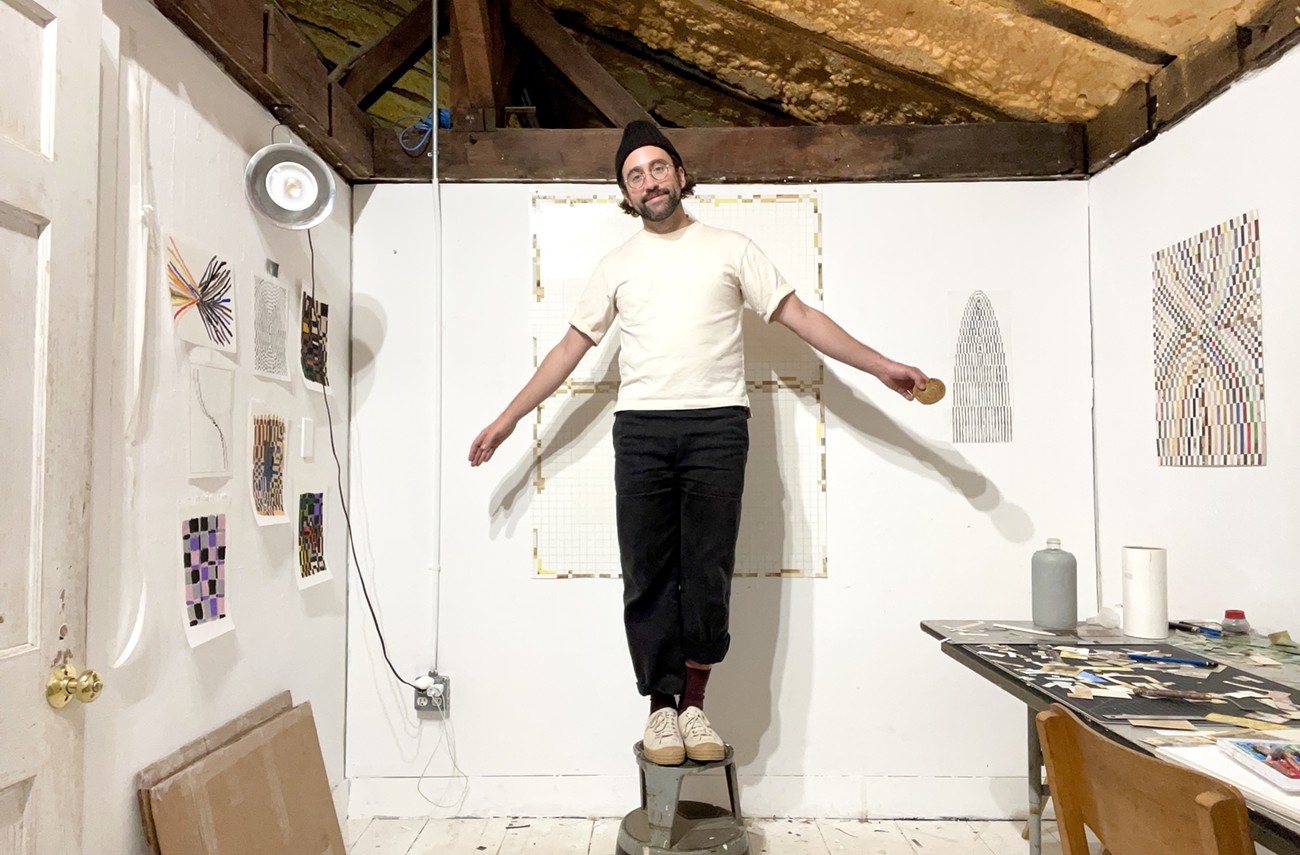 Joe Rudko is a Seattle-based artist whose primary work is geometric collages made from found and repurposed photographs. He received his BFA in Photography and Drawing from Western Washington University in 2013. His work is in the permanent collection of the Getty Museum, Portland Art Museum, Tacoma Art Museum, the Museum of Fine Arts Houston, and, most recently, the Morgan Library & Museum in New York. In our interview we talk about distorting perceptions, breaking rules, and the strange power of memory.

I’m a little obsessed with speculating on your process, which seems thrillingly methodical and painstakingly precise. Can you reveal a bit about the steps that go into a new piece of work?

Sure, thanks for taking the time to ask. I suppose the process starts with the photographs and snapshots that I’ve collected over the years. I grew up in the Seattle area thrifting, and became fascinated with vintage snapshots; portraits that reminded me of people in my life, or landscapes that felt familiar. I began cutting, collaging, and drawing alongside the original images, and people in my community took note and started sending materials from their own lives—mostly forgotten photographs, old albums in storage, pictures that had been digitized and were no longer wanted. I developed different ways to process this ever-growing pile of imagery; I’ve torn, spliced, weaved, shredded, cut, stained, stacked, and developed algorithms.

Lately, I’ve been cutting apart images according to their color to make a “palette” of photographs to select from. It’s a lot like how I imagine it is to make a mosaic.

Do your photographic source materials center on a favorite era? And what do you primarily look for in your image sourcing? Colors or a certain subject matter?

I like using photographs that span the history of printed photographs, so some of the fragments date back to the late 1800s, while some are from the 1990s. Different eras have different colors, textures, patinas, and surface qualities that interact with one another in interesting ways. I’ve noticed that images from the 1990s tend to have more saturated, poppy colors. Fujifilm skews cool, and Kodak skews warmer. 1980’s prints have a lot of purples in the shadows; 1960’s Kodachrome has a less saturated feel, often with a single color cast. Sometimes I’m drawn to the back of an image and the branding of the paper, or a particular scrawl or handwriting labeling.

As a trained photographer and collector of photographic source material, did you ever wrestle with the idea of "destruction" vs. "transformation"?

Sometimes I get asked if I “feel bad” or “guilty” about cutting up original photographic materials. I think there’s some energy and implied history built into the material of the photograph that people are responding to. The pictures that end up in my studio are unknown, lost, or forgotten ones. I try to embrace the "not knowing" and give them new life.

Compositionally do you look to textile craft for inspiration, like weaving or quilting? Or are those visual associations more arbitrary?

Recently I’ve been looking to the Gee’s Bend quilters who repurpose worn denim and fabrics to make their quilts. I made a piece this year titled Quilt, which is just that—a patchwork composition built around various colors I collected in snapshots. I’ve also been living with a two-tone Berber rug from Morocco, and its rippled patterning and slow handwoven structure inspired a recent show of two-toned collages I had at Von Lintel Gallery in Los Angeles.

Splicing and shuffling photographic memories into a wholly new visual expression makes me think of how memory works, how a lifetime can be condensed into one abstracted reflection. It makes me think of one’s life flashing before their eyes, or some kind of non-linear Mutoscope. Are you aiming for any subconscious storytelling or visual themes in your work?

I like that phrase, “abstracted reflection,” because that’s what photographs do—they distort how we see ourselves and the world around us. My own memory and history is an unfixed thing that I’m constantly making sense of through conversations, images, and making art. I was raised with a lot of religious fundamentalism that taught absolute truths and literal interpretations of the world, similar to a photographic illusion. Breaking photographic rules, pattern-making, and tapping into visual traditions of painting, quilting, drawing, and abstractions, is a way of bending genre and welcoming everyone to the party.

Tags: Visual Art
The Stranger depends on your continuing support to provide articles like this one. In return, we pledge our ongoing commitment to truthful, progressive journalism and serving our community. So if you’re able, please consider a small recurring contribution. Thank you—you are appreciated!
CONTRIBUTE NOW